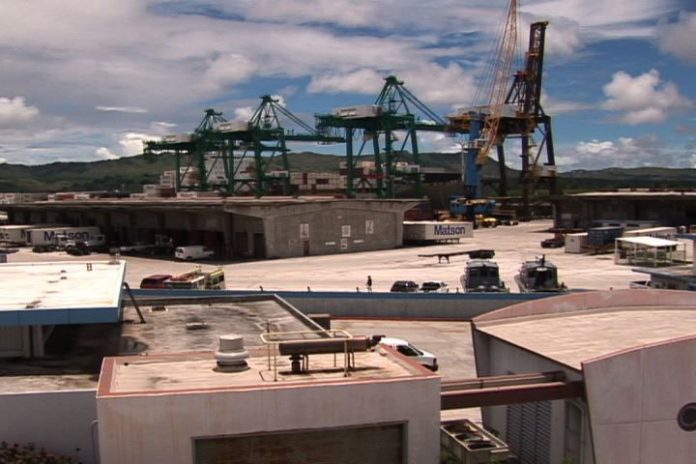 Guam – Two top lifters at the Port Authority of Guam are down causing a backlog of Cargo, However port G.M. Joanne Brown says they will be repaired and the port will work through the weekend to get cargo out.

The Port Authority of Guam has only four top lifters which are used to stack 20-45 foot containers. Yesterday(Thurs) morning only one was working. In the afternoon one was repaired and two are now in operation but the lack of top lifters has caused a backlog of cargo. Port G.M. Joanne Brown says they are repairing the two top lifters and in the meantime they will expand their hours of operation to get the cargo out. “Particularly because we are in the holiday season the port this weekend Saturday and Sunday we will extend our hours to allow truckers to come in and move the additional cargo that they’ve not been able to so that allows some additional time to move over the weekend where normally the port would be closed during that time,” said Brown.

Brown says the problem is that the port does not have enough top lifters to perform regular maintenance. She says the current type of top lifters they have are adequate. “The port acquired the four top lifters about 6 years ago. They are designed to perform the work that they do and they will probably be able as well as, assuming that they are properly maintained, they should be able to use it for another ten plus years,” said Brown.

The port GM says the port should be operating with 8-10 top lifters They found funding for 4 more top lifters but Brown says their problem has been procurement. “GSA actually did award a vendor a procurement of the top lifters Since then I got a notice around 4 o’clock yesterday afternoon that a company has since protested that bid that had been awarded so we are once again are stifled,” said Brown.

Brown says this is the second company to protest the procurement that was initiated 7 months ago. She says it could take 8-12 months now to procure four more top lifters because of the procurement protest. Brown says she is dumbfounded by the procurement process which has caused the inability of the government to get the equipment it needs even when it has the money for it.