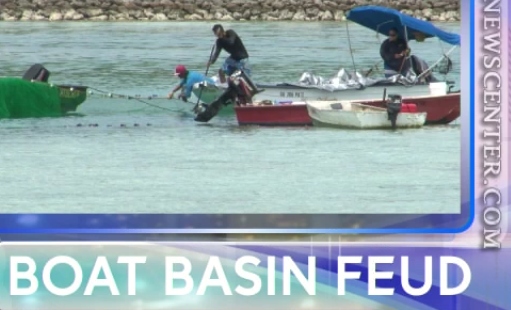 It’s atulai season and each year, as the young mackerel flourish in our island’s waters, a decades-old rift between anglers and netters also surfaces. But that rift may come to an end as the Port Authority of Guam, which has jurisdiction over the Agana Boat Basin, says they will begin an aggressive campaign to enforce fishing regulations.

The rift is between rod and reel fishermen or anglers and netters, those casting nets from their boats. At the center of the issue is local net fisherman Johnny Atulai Taitano and Angler Peter Gervacio, both men fishing for sustenance.

At contention is the method used by Taitano as Gervacio claims to have video evidence of Taitano setting nets within the boat basin channel. According to Gervacio, he has reported Taitano and others to the Port Police, having videotaped the violations in recent days, but says nothing has been done.

“If a guy goes down to Tumon bay and fish and they catch him, they take his equipment and they give a fine and put them in jail. When these guys get caught, they slap their handstand and say have a nice day. Why is it they enforce the rules and regulations down there but yet they won’t do it here,” Gervacio said.

He added: “This morning some guy was attempting to drop their net then Port Authority came down and told them that they better come pick up their nets.”

Port GM Rory Respicio is familiar with the rift, telling PNC that he recalls this issue from his days at the legislature. He says the issue isn’t a debate between the two groups but instead a matter of following the law. Each time there is a report, Port Police responds and moving forward, Respicio said there will be a more aggressive effort for enforcement which could result in effectuating arrests for those caught in violation.

Respicio says the port will be conducting an internal investigation with the evidence obtained to see what type of enforcement action they can take which may include the confiscation of the boat, net and catch.

Respicio met with Taitano today, issuing him a formal warning against violating the rules and regulations. Respicio says that Taitano has acknowledged that it’s illegal to fish in the boat basin channel and inner harbor. Taitano will be talking to other netters and has agreed to comply with the current rules and regulations in place.