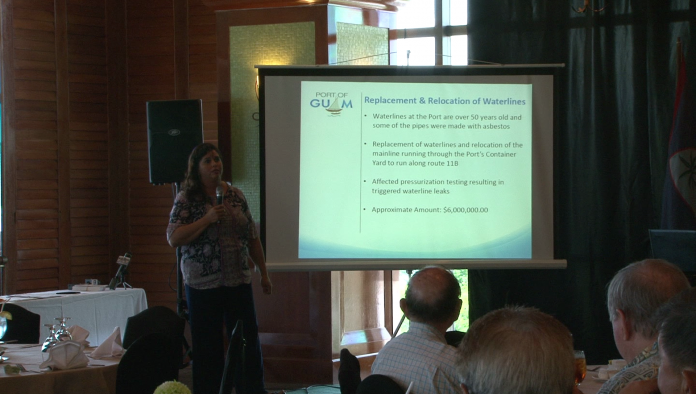 PAG GM Joanne Brown underscored the importance of securing a bond to fund their CIPs.

Guam – The Port Authority of Guam is undertaking a number of projects in an effort to modernize the port, but some of the more pressing issues were highlighted at a Rotary Club of Tumon Bay meeting.

Port Authority General Manager Joanne Brown was the guest speaker at Tuesday’s meeting where she gave an update on the projects the Port is working on, including a bond they’re pursuing.

One of the issues Brown talked about was the deteriorating golf pier, which is one of two piers that brings in fuel to the island. Brown says it will cost about $2 million to refurbish.

Another area of concern for the Port is its old and decaying water lines. Brown explains that their water lines are over 50 years old and some of their pipes were made with asbestos.

“We’re estimating it may cost somewhere around $6 million to do that. We have constant breaks in the yard and again that’s the operations. Actually when they did the testing for the new yard, we could not bring the pressure up to the level we needed to ensure we got firefighting requirements because we keep breaking and more leaks out in the yard,” noted Brown.

Brown says the bond the Port Authority is pursuing will fund these and other critical projects and she notes that this is the first time that the Port has ever pursued a bond.