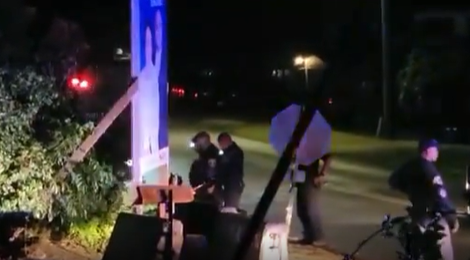 An internal affairs investigation has been launched into the police pursuit that ended in a motorcycle crash two nights ago.

Police cars gave chase to a motorcycle speeding along Route 17 and ended in Santa Rita with the motorcycle crashing on a concrete barrier.

The crash was captured on video and has been circulating on social media.

In another video of the same crash, a man behind the camera is heard alleging that police officers responding to the crash were kicking the downed man — however, the video does not show any police officer kicking the man.

Officers told the man to keep his distance and to stay back, and another man is heard saying “Tase him!”

investigators have been activated to determine the circumstances of the crash — what exactly prompted the pursuit and whether or not the allegations of police brutality holds weight.

The man, who has not been identified, suffered serious injuries as was transported to the Naval Hospital. His condition is currently unknown.