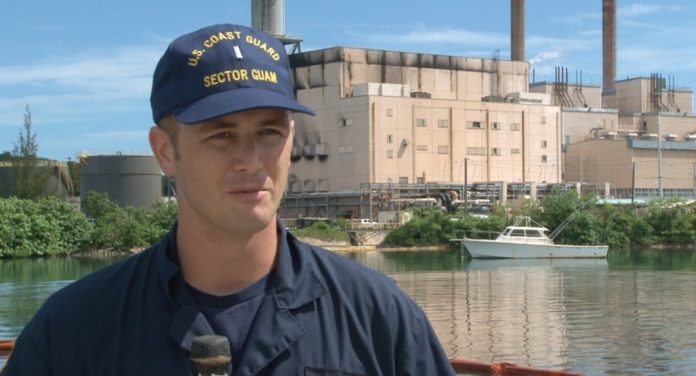 Lt. James Davis tells PNC why the Coast Guard was at the Piti Powerplant.

Guam – More fallout from the explosion earlier at Cabras 3&4, as the Guam Coast Guard, along with other agencies, were dispatched to help with a reported oil spill.

The coast guard is still responding to an oil spill resulting from the explosion and fire at the Piti power plant earlier this morning,this according to a press release. The Coast Guard implemented a safety zone and issued a marine bulletin advising mariners not to transit Piti channel, and the Gerberville area in order to prevent further spread of the oil. The safety zone has since been lifted, however a broadcast notice to mariners is still in effect for a small inlet south of the Piti power plant, eastern end of Piti Channel.the coast guard is working with other local agencies such as the Guam EPA and the Guam Fire Department to help respond to the spill.

“We responded to, as we typically do for oil discharges and this emergency happened to be as a result of a fire. And [the] Guam Power Authority during that fire had a large amount of oils released from it and it went out through this discharge port behind me. As it entered the water were thinking this large amount, were insuring that the responsible party which is the guam power authority cleans up the oils, as they’ve done, they’ve hired several contractors and put out resources such as boon and boats and were here to basically regulate and make sure clean up is done properly,” said Davis

Lt. Clifton Graham of the US Coast Guard says the response to the oil spill is still ongoing.