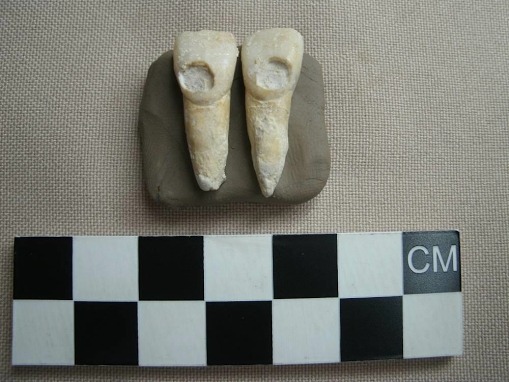 “They would’ve been inlaid with something precious or semi-precious even it could’ve been something like jade or gold..” – Judy Amesbury.

Guam – What kind of traditional jewelry did the Chamoru people wear before the Spanish era? What other kinds of body ornamentation did they do? Well it turns out they wore various kinds of shell beads as necklaces and bracelets and they even adorned their teeth.

They not only wore drilled tiger shark teeth they also decorated their own teeth. “You can see his two front teeth have little circular pits in the front and that’s because they would’ve been inlaid with something precious or semi-precious even it could’ve been something like jade or gold but if he already had the inlays in place before he died somebody must’ve popped them out before they buried him because we don’t know what his teeth were inlaid with,” said Amesbury. This particular find is the only example archaeologists have found in the Marianas of inlaid teeth and it is from the pre-latte period. In the Latte period Chamorus incised their teeth with various designs.

Judy Amesbury spoke to the rotary club of Tumon bay today(Tues) about the findings at the Naton beach burial site in Tumon. the site contained both pre-latte and latte burials. “From this site there were more than 1,700 ornaments,” said Amesbury.

It’s estimated that chamorus were in the marianas for 3,500 years to possibly even 4,000 years.

To learn more about these fascinating discoveries be on the lookout for a booklet, website and display that Amesbury is developing with the support of the Guam Preservation Trust CAHA and GVB for FESTPAC.