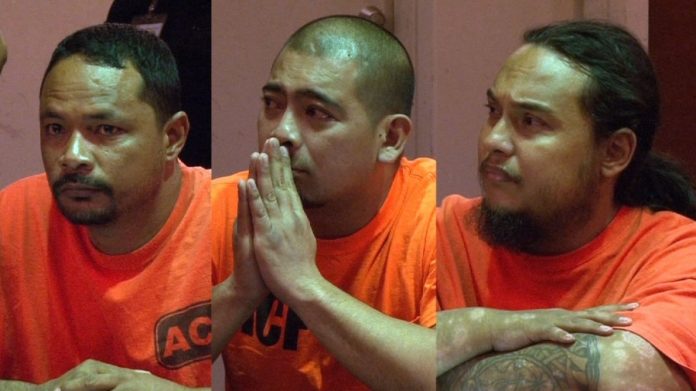 The preliminary hearing for Jaycee White, Alfredo Castro, Richard Ragadio, and five others, originally scheduled for Nov. 3, has been moved to Thursday, Nov. 10 at 4 p.m. before Judge Michael Bordallo.

Guam – Yesterday, a motion was granted to move the hearing date of Jaycee White, Alfredo Castro, Richard Ragadio, and five other individuals from Nov. 3 to Nov. 10.

Jaycee White, accused of delivering the blow that eventually killed bodyboarder Brian Cruz, is out on $5,000 cash bail, while Alfredo Castro and Richard Ragadio, both of whom allegedly helped White dump Cruz in the back seat of their car instead of calling for help, are out on $3,000 cash bail. All three defendants are on house arrest.

The three men, along with five others, have also been charged with rioting as a third-degree felony for a fight that broke out at Linda’s Café that same night a week and a half ago.

In a motion filed last week, Asst. AG Matthew Heibel cites Guam law that allows for a preliminary hearing to be scheduled 20 days after a defendant first appears in court if they are released from custody. But since 20 days would fall on November 13, a Sunday and November 11 is a holiday, Heibel asked that the hearing be scheduled for November 10.

The preliminary hearing is now scheduled for Thursday, Nov. 10 at 4 p.m. before Judge Michael Bordallo.