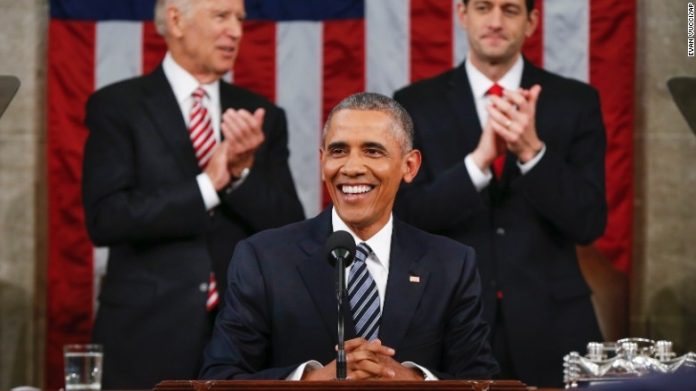 President Barrack Obama promised to continue to push through important policies in his last year but spoke mostly on what he hoped America would accomplish in the years after his presidency.

President Barrack Obama said he would continue to push as much change as possible during his last year and he spoke with extreme confidence and optimism in the future of America.

Obama said he hoped to work with Congress on everything from criminal justice reform, to prescription drug abuse. He promised to keep pushing to fix the broken immigration system to to protect kids from gun violence, to get equal pay for equal work, and to raise the minimum wage. The President promised to not let up until these things get done.

However instead of focussing soley on what he wanted to do in his last year as President, Obama’s final State of the Union address focussed on what he would like to see in the next five years and beyond. The President focussed on the future of America one he painted as a bright.

“That’s the America I know. That’s the country we love. Clear-eyed, big-hearted, undaunted by challenge, optimistic that unarmed truth and unconditional love will have the final word. That’s what makes me so hopeful about our future. I believe in change because I believe in you the American people and that’s why I stand here as confident as i have ever been that the state of our union is strong! Thank you. God Bless you. God Bless the United States of America!” proclaimed America’s first Black President in his final State of The Union Address.