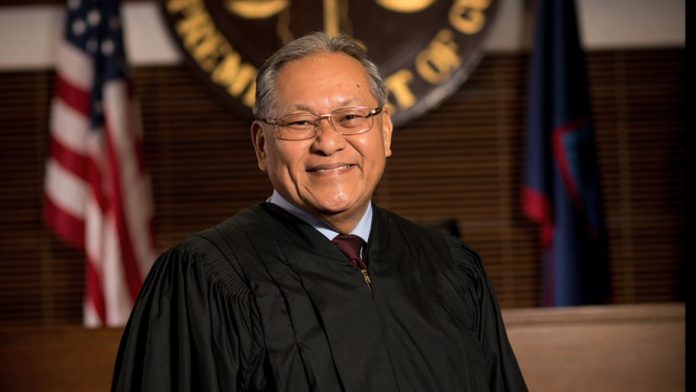 Guam – The Judiciary of Guam held a special ceremony this morning honoring Presiding Judge Alberto C. Lamorena III for his 30 years of service in the Superior Court of Guam.

Presiding Judge Lamorena was appointed to the trial court by former Guam Governor Joseph F. Ada and sworn in on July 13, 1988, following five terms as a Senator in the Guam Legislature and a decade in private practice. A graduate of both the University of Illinois-Urbana and the University of Texas, Lamorena earned his law degree from Drake University in Des Moines, Iowa in 1977.

During the ceremony, Lamorena said he loves working for the judiciary and he thanks his colleagues, judiciary employees, and family members for making his job enjoyable and worthwhile.

“It’s fun working for the judiciary. I have enjoyed the relationship with the justices, judges, staff, stakeholders. In the 30 years, I feel like we have accomplished a lot for the judiciary and the people of Guam. We couldn’t have done this without the employees of the judiciary and the cooperation of our stakeholders. I want to thank them for their love, support, and dedication for this branch of government and the people of Guam,” said Lamorena.

The special ceremony was held at the Guam Judicial Center this morning.