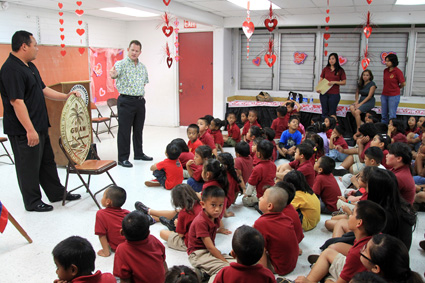 It was Career Day and Tenorio was invited to speak about his role as the Lieutenant Governor of Guam. Many students were delighted to be given the opportunity to engage in interactive dialogue with the lieutenant governor.

“One of my jobs as the Lieutenant Governor is to take care of the Guam Seal,” Tenorio said. “This is the face of Guam, and as the Keeper of the Seal, I want to make sure we understand its importance to our island’s identity.”

The Lieutenant Governor’s appearance will be the first of many visits to Guam’s schools in a project he calls “Seal: On Tour.” Now that cleaning has been completed by Guam Museum, Tenorio plans to take the Seal to schools to educate children about the history and significance of the symbol of Guam.