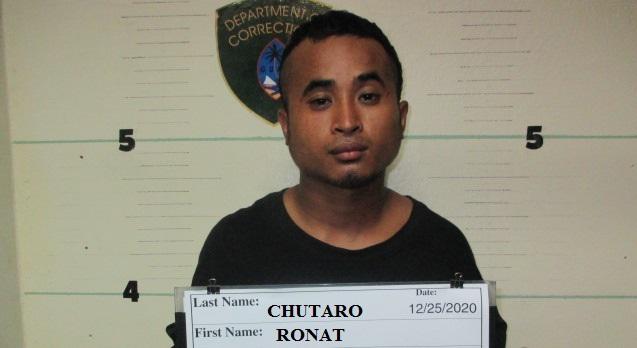 The man police say is responsible for the murder of Arthur Wakuk has been charged but according to the suspect, he was acting in self-defense.

After an extensive 2-week manhunt for primary suspect Ronat Chutaro, police have made several arrests in the case but only Chutaro is charged with murder. On Christmas Day, police arrested Chutaro and his girlfriend identified as Mathinia Atiput. She was arrested for hindering apprehension after police found Chutaro with her.

Police had been investigating the fatal stabbing of Arthur Wakuk who was stabbed in the neck. The injuries were so severe that he was placed on life support and died two days later without police being able to interview him.

But surveillance footage of the confrontation tells a different story.

Court documents state that the footage showed two males, Chutaro and Cassidy Nakamura. As Wakuk approached with his car behind the Docomo headquarters in Tamuning, Chutaro remained in the middle of the road.

The video shows Chutaro kicking the bumper of Wakuk’s vehicle. Wakuk stopped, exited his vehicle, and was immediately attacked by Chutaro.

Court documents indicate that as the fight ensued Chutaro struck Wakuk in the neck and he falls to the ground.

Police say Nakamura made attempts to stop Chutaro but to no avail. The two are then seen fleeing the scene after Wakuk collapsed.

Chutaro admitted that he had been wearing the white sweatshirt/sweater and attempting to avoid arrest by hiding from the police. Police discovered him at a home on Swamp Road in Dededo. He had been avoiding areas he was known to frequent.

Police learned that members of the community, and Atiput, had helped him evade detection by providing him transportation, getting clothes from his apartment, and helping him with food.

Chutaro has been booked and confined on charges of murder and aggravated assault, both with the special allegations of use of a deadly weapon in the commission of a felony.