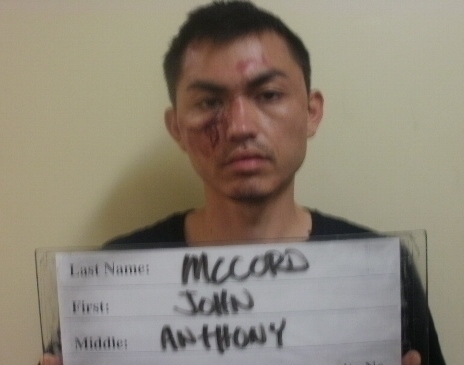 Guam – A prisoner at the Department of Corrections could now be spending more time in prison after authorities say he assaulted two corrections officer, one of whom he allegedly knocked unconscious.

John Anthony McCord, 23, was arrested in September of last year on drug related charges. According to a magistrate complaint, McCord physically assaulted a corrections officer on Saturday while the officer was escorting him from the showers back to his cell.

“Without warning, McCord began punching [the officer] in the face. According to [the officer], he briefly loss consciousness and awoke to find McCord continuing to punch him in the face,” the magistrate complaint reads.

Although other prison guards were eventually able to stop McCord, just a few hours later, authorities say he struck again.

“McCord was inside his cell and [another corrections officer] instructed McCord to place his hands through the food tray slot so that McCord could be handcuffed. While being handcuffed, McCord grabbed [the officer’s] left arm and pulled it through the food slot,” the complaint states.

McCord was subdued, but the second officer reported that it wasn’t until later that he realized he had cuts to his left arm.

Other officers who were present corroborated the stories of both victims.