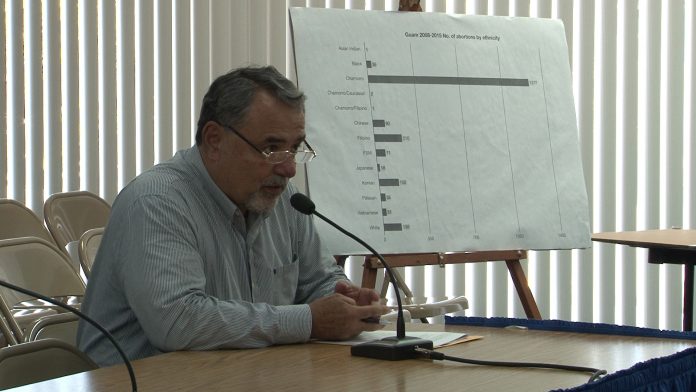 A public hearing was held on a bill that will increase penalties for failure to report the gestational age of aborted babies.

Guam – A public hearing was held today on Senator Frank Aguon Jr.’s bill 168-33, which proposes to increase the penalties for abortion providers who fail to report the gestational age of aborted babies.

The measure was introduced as a result of the lack of reporting. In December 2014, Senator Aguon’s bill 412-32 was enacted into law which required that the gestational age of aborted babies be reported to the Department of Public Health.

But because the law has clearly not been followed, Senator Aguon introduced Bill 168, which will increase the penalties for failure to report from a misdemeanor which carries a maximum 1 year in prison to a felony, which carries a term of up to 5 years in prison.

In addition, the bill proposes to fine violators up to $100,000. Tim Rohr is with the Esperansa Project, a local pro-life organization.

“This means that gestational age should have been reported by the abortion providers for at least 11 months of 2015 however 2015 abortion report as produced by Department of Pubic Health and Social Services Office of Vital Statistics on March 17, 2016 … does not show this category,” testified Rohr.

Public Health’s Chief Public Health Officer Suzanne Kaneshiro also testified in support of the bill, noting that the bill will make clear that it is the responsibility of abortion providers to submit completed forms.

You can read his testimony by clicking on the file below.