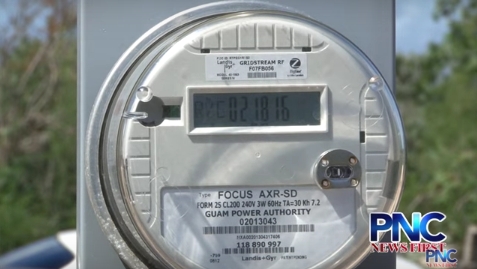 GPA has maintained, through its response to the PUC and Numerous interviews, that they are calculating power factor correctly.

Last week, PUC board members agreed to set up a meeting with the makers of GPA’s smart meters, Landis and Gyr, this according to PUC administrator Lou Palomo. First Green Solutions CEO Rick Sparacio says that before the smart meters were installed, his company was able to save customers more money using his U-S-E-S system, a system that helps ratepayers save money on their power bills, especially larger customers like hotels and shopping centers.

“Every installation that we were personally involved in improving the power factor, saw a definite decrease in the KWH usage immediately the following month on the power bill, however since the smart meter went in that has not been as much of a reduction, says Sparacio.

This is proof, according to the Sparacio, that GPA is incorrectly reading the smart meters to a point where they are billing the ratepayer for more power or kwh, than they are actually using…all because GPA is using an incorrect calculation. Sparacio, however, says he is able to provide his customers savings, just not as much as they could be, if GPA were correctly following the tariff.

“Yes, we are seeing a 5-7 percent on average from our technology but we are not seeing the ten to 15 percent that they were seeing with the analog meters and should still be seeing if GPA would follow the tariff using their smart meters,” says Sparacio.

Just last month, GPA provided the PUC with an updated response on how they measure ratepayers efficiency and power usage. After meeting with both GPA and first green solutions, PUC PIO Fred Horecky says that the PUC agreed to directly meet with Landis and Gyr, the meter makers, to find out more info. According to Horecky, the proposed meeting date for Landis and Gyr and the PUC is May 4, but that date has not been finalized. As for Sparacio, he says although it is not his first option, if the PUC fails to make a decision, he and his company will be forced to pursue litigation.

GPA has maintained, through its response to the PUC and Numerous interviews, that they are calculating power factor correctly.