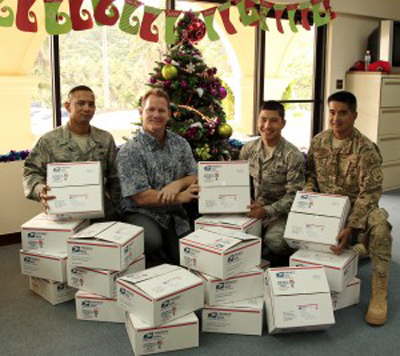 Guam – Many of Guam’s sons and daughters won’t be here to celebrate Christmas with family and friends. They’ll be fighting for our freedom oceans away, so Adelup worked to send them some Christmas cheer.

Lt. Governor Tenorio started Project Minagof to ship care packages to our troops, which include various local products and a rubbing of the Great Seal of Guam. This is the third care package shipment by the Office of the Lieutenant Governor, The Works! Foundation, and with the Family Readiness Program of the Guam Air National Guard.

Project Minagof has sent out more than 300 care packages to local service members throughout the world to date. ”We are so happy to support service members with a package from their home, especially in time for the holiday season,” said Lieutenant Governor Ray Tenorio. “Project Minagof is about giving something from Guam to those who sacrifice so much for the freedoms we enjoy every day. We want to let them know our island is grateful for their service.”

“These Airmen are heroes preserving our freedom,” said Governor Eddie Baza Calvo. “We want them to know we are thinking of them during this season of giving.”

Project Minagof thanks the staff at the Guam Air National Guard Family Readiness Program and the Office of the Lieutenant Governor for donating gift wrapping paper and assisting to wrap all the items included in each package.