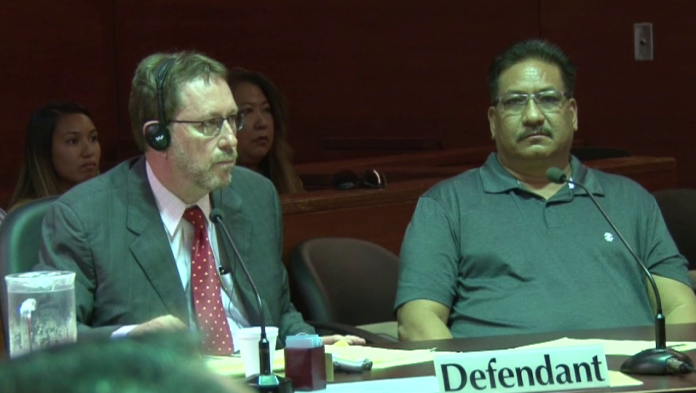 Guam – It’s only the first day of trial for former Guam Police Department Col. Mark Charfauros and already a motion has been made for mistrial.

Charfauros is accused of obstructing governmental functions and official misconduct stemming from an incident which occurred two years ago. Charfauros was captured on body camera berating fellow police officers who were responding to a call of illegal fireworks.

The first day of trial began like many other cases, with opening statement outlining what the government intends to prove and what the defense believes the evidence will show. But things quickly escalated when the government’s first witness, GPD officer Craig Calvo, took the stand.

The government laid the ground work, questioning Calvo about the events that transpired the night of December 24, 2016, when Calvo allegedly heard the loud booms from what he believes was fireworks.

“When I responded I saw a two story house. Across was a party going on. Exited my patrol vehicle and saw fireworks coming from the second floor of the two story house,” he describes.

Calvo is the officer that conducted the preliminary investigation, which he says he was unable to complete as a result of Charfauros, who was his superior, ordering the officers to leave the scene. Calvo noted that it is “very unusual for the colonel to show up at the scene being actively investigated.”

But it’s Charfauros’s conduct which is in question.

Charfauros’ attorney, Randall Cunliffe, questioned if Calvo’s legal counsel had spoken to his client that night and while the response was no, that question appears to have opened the door for the prosecution to question why.

“I had reason to believe that the colonel was affiliated with the Agat Blood Town gang,” Calvo asserted.

This statement struck a chord with Cunliffe who immediately objected to the statement and motioned for a mistrial. According to Cunliffe the prosecution’s attempt to smear the case by claiming Charfauros has an affiliation with a gang is prejudicial and not relevant to the charges in the case.

The prosecution however contended that the affiliation to the gang was the motive for Charfauros’ actions.

Superior Court Judge Maria Cenzon however was not hasty in making a decision.

Further arguments on the motion for mistrial will be heard Thursday.

Charfauros also brought his case before the Civil Service Commission and while the commission has ruled in favor of Charfauros on his demotion, he continues to fight his termination from the police department.

The CSC has meanwhile issued a stay in its own case and ruling, pending the outcome of the case now before Judge Cenzon.