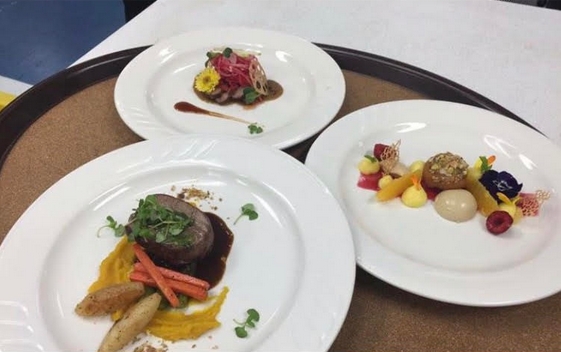 Due to Guam Community College’s fiscal shortfalls, the institution has had to make drastic cuts to their ProStart program, a GCC culinary competition.

Guam – It appears the fiscal shortfalls are starting to take its toll at Guam Community College with the administration prioritizing payrolls over programs. For the ProStart team at Okkodo High School — the winning group of GCC’s culinary competition, the students were told that it was a lack of appropriated funds keeping them from competing at Nationals.

Months of preparation and training led the students to an ultimate payoff: four Okkodo High School seniors won $3,000 each in GCC’S ProStart scholarship after a grueling culinary competition last Thursday.

The team received glowing remarks and high praise from some of the island’s most renowned chefs. But shortly after, the team was told that they would not be making it to the final round in South Carolina after all. When PNC interviewed the students today, the feeling was bittersweet.

The group told PNC that their rigorous training schedule includes four to five days of practice, even on the weekends if need be. Each student has amassed several hours of dedicated study just to compete at a national level. And with the South Carolina competition looming in the next two months, Chef Kennlyn Miranda, Okkodo’s Prostart Instructor, worries that the group risks falling behind while they wait for funding confirmation.

So, what happens when Guam’s programs are not matching up to the students’ capabilities? For these four high school seniors, it meant speaking up. The teammates took it upon themselves to call on their local leaders for support. In a social media post, the students tagged Senators Frank Aguon Jr., Dennis Rodriguez, Michael San Nicolas, and even Lt. Governor Ray Tenorio and Governor Eddie Baza Calvo.

The students said their posts have been met with positivity thus far, which they believe reiterates their confidence in placing high at Nationals.

ProStart is the career and technical education program in Guam’s public high schools that feeds into GCC’s Culinary Arts program, says a community college press release. Jayne Flores, GCC’s Assistant Director of Communications, maintains that the institution understands how important this program is to the students, but offered no immediate suggestions nor creative options for the students to achieve their goal. Flores adds that unless a program is federally funded or provided via grants, all funding for travel has been suspended at GCC, due in part to the lack of funding.

GCC, UOG, AND DOE are all still behind in allocated funds from GovGuam in both FY16 and FY17.

“It is unfortunate, but we are fiscally, extremely vulnerable right now, and payroll must be the priority,” Flores shared. She adds that GCC is nearly $10 million behind in appropriations from the last fiscal years.

It’s not yet clear if the funding should have been appropriated to the winners of ProStart to begin with, but Okkodo’s administration says it doesn’t make sense to cap students’ potential, especially when the students exhibit tireless dedication to their craft.

“We’ve been working since our sophomore years to get to this level. We know for sure that we can win in the nationals, so we wanted to bring honor back to Guam as well,” said team member Xela Marie Oivario.

The students would need to raise around $20,000 just to compete in South Carolina this April.

To be clear, they’re not asking the community to raise funds on their behalf, but rather to highlight the issue to the legislature, the Governor, and the Lt. Governor to expedite the process in appropriating the funds they need to compete abroad.

Perhaps, this one concrete example will doubly serve as a spotlight of the cascading effects of the recent fiscal shortfalls.

The Chairman of Education, Senator Joe San Agustin and Chairman of Tourism, Senator Dennis Rodriguez were not available for comment as of news time.