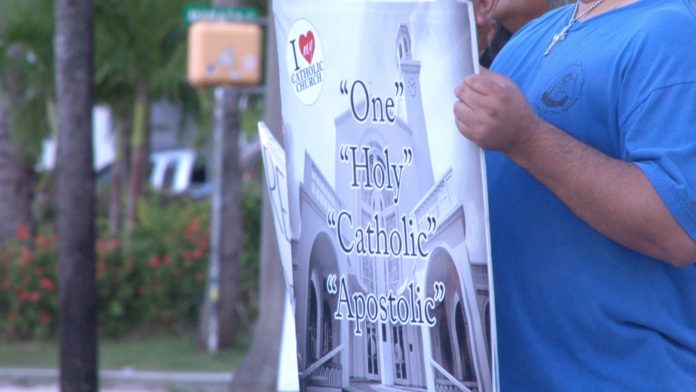 Some members of the catholic church held a protest in front of the Hyatt Hotel Sunday evening to coincide with Archbishop Anthony Apuron’s benefit event also held at the Hyatt.

Guam – Picketers staged a protest outside the Hyatt Hotel last night calling for the resignation of Archbishop Anthony Apuron who was hosting a benefit dinner at the hotel.

The protest was organized by a group of members of the catholic church who have been holding protests almost on a monthly basis.

This time, the message was stronger than ever. In addition to expressing dismay at the archbishop’s decision to remove two beloved priests from their duties, as well as the controversial alleged turnover of the Redemptoris Mater Seminary to a third party, organizers of yesterday’s protest say they’ve finally had it and want the archbishop to step down.

Teri Untalan is a spokesperson for last night’s protest. “We are at this point just asking the archbishop to restore these priests to their parishes, return the Yona property that he stole from the catholics of Guam and resign. We are not looking for reconciliation at this point. We are just asking him to resign from his position. We have no confidence in him and we feel that the only solution when you have no confidence in your leader is to step down,” Untalan says.

The protesters also held signs criticizing Archbishop Apuron’s decision to hold an event that is reportedly meant to benefit the RMS when the money could be used for other, more pressing issues, as Untalan points out.

“He’s having a $200 per person fundraiser this evening. These are monies that could be used to feed people–hungry people, the homeless; do something about housing them. And yet he continues to collect these monies to bring in these foreigners into our shores and crank them out as supposed priests to continue to perpetuate this heresy that he has brought into our catholic church,” Untalan laments.

PNC reached out to the Archdiocese of Agana for comment, but Spokesperson Father Adrian Cristobal said the Archdiocese will not be commenting on the matter. However, he did confirm that the event was a gala fundraiser to benefit the RMS, the St. John Paul seminary, as well as the Dulce Nombre de Maria Cathedral-Basilica. The honoree of the gala dinner, he says, was the archbishop, commemorating his 70th birthday. Gala tickets cost $200 per person.