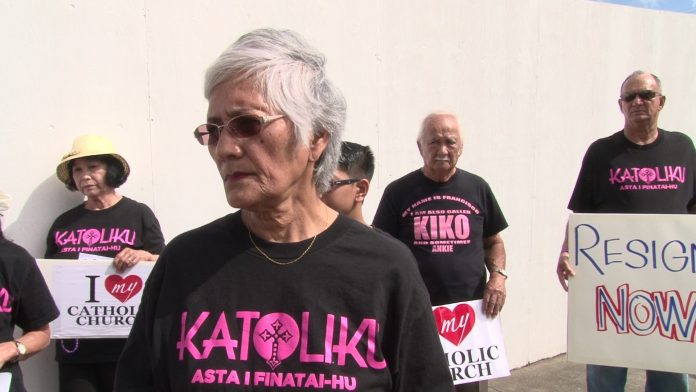 The Forward Laity Movement held their first prayer protest of the year.

Guam – The first Catholic prayer protest of the year was held yesterday and again, the message is clear, the Laity Forward Movement wants the Archbishop out.

The protest was held across the street from the Dulce Nombre de Maria Cathedral Basilica in Hagatna. This follow numerous protests held throughout last year in which members of the Concerned Catholics of Guam voiced their concerns about Archbishop Anthony Apuron.

There’s no sign, however, that the Archdiocese will concede as they have in the past sent out statements contesting claims and rumors of misdeeds.

Some of the demands the protesters made have to do with the controversial multimillion dollar Redemptoris Mater Seminary as well as the removal of certain priests.

Mae Ada is with the Laity Forward Movement. She explains why the group held the protest.

“To remind the archbishop that we need to get back our seminary away from the RMS and to restore the two priests, Father Paul Gofigan and Msgr. James Benavente. We need them back and we want the neo to be out of our diocese. They cannot continue to control the archbishop and to control Guam. We want our church back,” she says.

Ada says the group is planning more protests and other events, such as fundraisers and village meetings. They will announce times and dates soon.