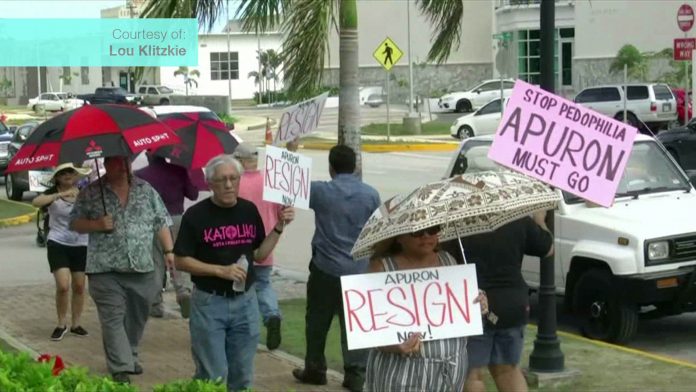 The catholic protesters were calling for Archbishop Anthony Apuron to be defrocked.

Guam – Catholic protesters continue to picket in front of the Cathedral Basilica in Hagatna.

They were at it again yesterday with another Sunday in the books. Dozens of protesters walking in formation, holding signs calling for Archbishop Anthony Apuron to be defrocked and removed. It’s been several weeks since Archbishop Savio Hon Tai Fai took over the Archdiocese of Agana while an investigation into Archbishop Apuron takes place for the alleged sexual assault of four altar servers at different times in the 1970s. Although some administrative changes have been made, such as the appointment of a new chancellor, a new sex abuse response coordinator and a new vicar general, still no decision has been made on Archbishop Apuron’s fate. Archbishop Hon has stated that the decision is not his to make. He is simply here to collect all the information to send it to Rome.