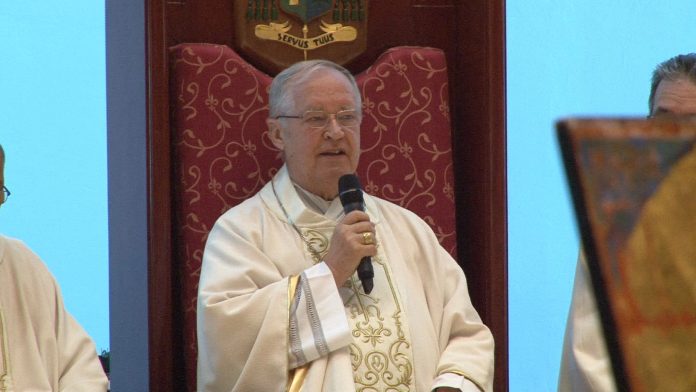 Cardinal Paul Cordes is on Guam to teach some courses at the Redemptoris Mater Seminary in Yona.

Guam – A visiting cardinal presided over mass at the Dolce Numbre de Maria Cathedral Basilica on Saturday as dozens of other Catholics stood outside the church holding signs in protest.

Cardinal Paul Cordes is on Guam to offer courses at the controversial Redemptoris Mater Seminary in Yona. He held a special mass Saturday evening and also made some announcements about Pope Francis’ endorsement of the neocatechumenal way.

Professor Giuseppe Gennarini, who is considered a leader of the neocatechumenal way in the US, also spoke during mass.

On April 21, Professor Gennarini was greeted by an angry mob of catholic protesters at the Guam airport.

During the Saturday mass, one protester spoke about why many of the catholics of Guam disagree with the neocatechumenal way.

“The people of Guam are very tired. Now they’re going out and they’re trying their best to save the church that’s going in another direction led by another kind of bishop and the catholic church here on Guam, we want our regular old traditional catholic church back. We don’t want something new,” said Jayden Comon.

The special mass on Saturday was the first time Professor Gennarini made a public appearance on island. He is here to teach a course for the seminarians at the Archdiocese, according to press release.