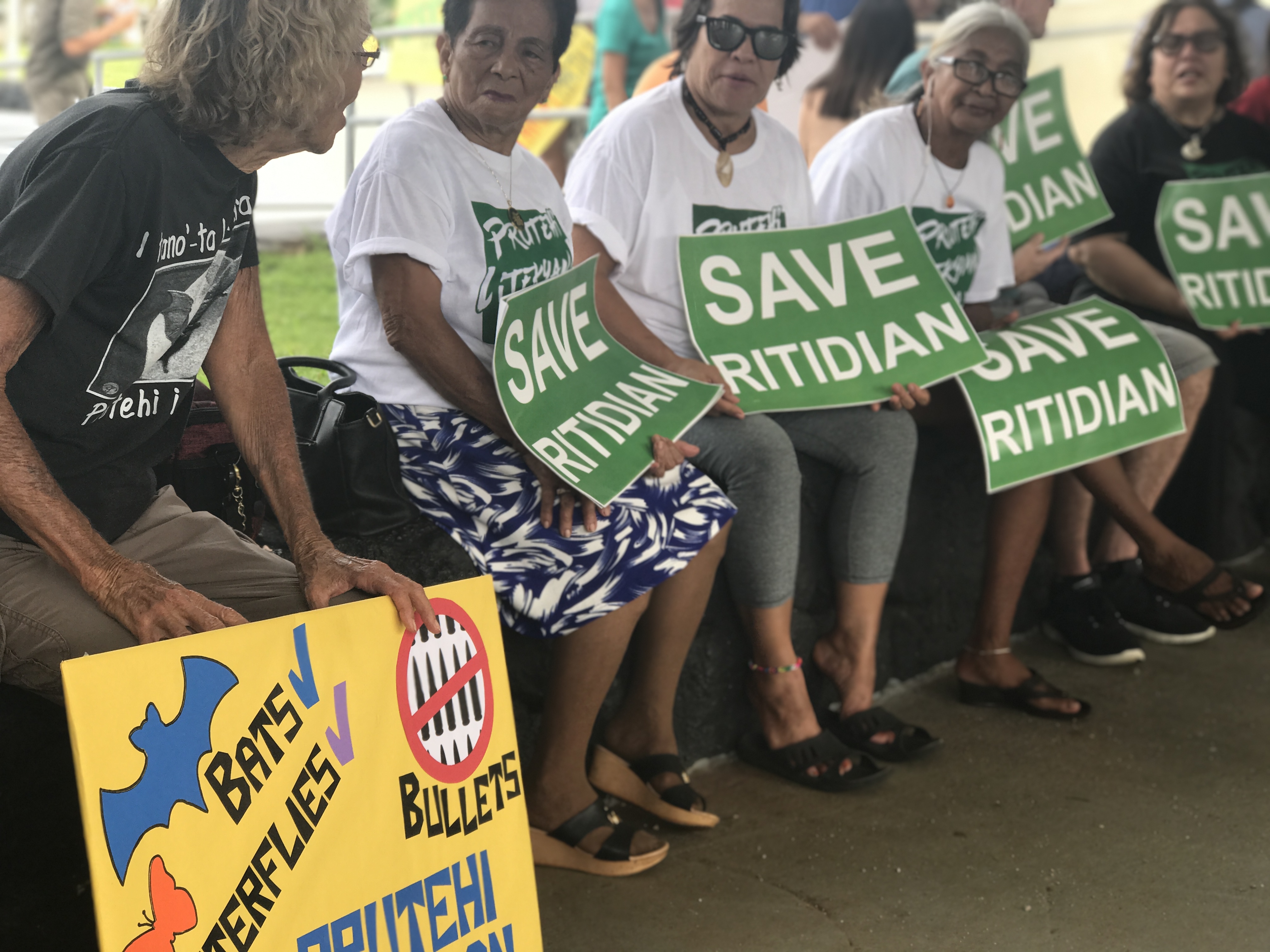 “I believe in the conservation of our endangered species and you know our sacred sites at Litekyan. I don’t believe that you could pick those up and move them to another place and see them thrive.” – Prutehi Litekyan member Maria Hernandez.

Guam – The group Prutehi Litekyan or Save Ritidian gathered at the legislature this afternoon(Thurs) to call out Senators who have remained silent on the adverse impacts of the live fire training range complex at the Northwest Field.

Just last week the group Prutehi Litekyan gathered outside of the Governor’s office to protest the placement of a live fire training range complex at the Northwest Field traditionally known as Tailalo’ in Chamorro. Today they took the protest to the Guam legislature. The group says it is also disappointed in DOD’s response to their concerns. According to the group a meeting with DOD officials including Rear Admiral Shoshanna Chatfield was “abruptly ended” and its members escorted out to the parking lot when they pressed for answers as to why DOD chose the site that their own studies say will cause the most negative impacts.

“The first two studies they throw it out basically on its ear. They say it is so damaging it is so unreasonable that we are not even gonna finish studying it because it’s not a reasonable option,” said Prutehi Litekyan member Kelly Taitano adding, “I have not come across a single study a single report that justifies that this is then a reasonable alternative.”

“I believe in the conservation of our endangered species and you know our sacred sites at Litekyan. I don’t believe that you could pick those up and move them to another place and see them thrive,” said Prutehi Litekyan member Maria Hernandez.

Senator Therese Terlaje issued a press release today(Thurs.) urging Governor Calvo to consider “the irreversible impacts to historic sites, the environment, and ancestral lands with the clearing of limestone forests in Finegayan and Northwest Field for construction of the cantonment and live-fire training range complex.”

(For Immediate Release – September 6, 2017, Hagåtña, Guam) Prutehi Litekyan-Save Ritidian expressed its disappointment with DoD’s response yesterday to concerns raised about the planned Live Fire Training Range Complex (LFTRC) at Tailålo (Northwest Field) with direct and indirect impacts to Urunao, Litekyan (Ritidian), Pahon, and Inapsan. The group met yesterday with Rear Admiral Chatfield about these concerns and asked for a pause in the ongoing construction activity to prevent irrevocable environmental and cultural damage. PrutehiLitekyan-Save Ritidian continues to ask that DOD live up to the One Guam principle that DoD committed itself to at the outset of the military build up. The principle of One Guam is essentially that the military build-up be is as good for us outside the fence as it is for those inside the fence.

1)    The LFTRC would cause irrevocable environmental damage to endangered and threatened native species and fauna, including åmot (traditional medicine) as well as to some of the last of our natural limestone forests which are thousands of years old by their removal. Previously these were protected by local families and then as part of a Wildlife Refuge that was imposed by the federal government to protect this site from this sort of damage. DoD has instead selected to harm our one area that has been set aside by local families and the federal government to serve as the safe haven for our endangered and threatened species. This is a reversal of decades of safeguarding and millions of dollars spent keeping snakes introduced by the military at bay along with local pigs and deer so that our native and endemic species can continue to contribute to the health of our island’s ecosystem.

2)    The project would damage historic and cultural sites including latte sites, a 3,300 year old village, and other significant archaeological sites as well as closing off this area to public access for most of the year.

3)    Potential harm to the norther aquifer as result of the construction of this site and the continuous bombardment of munitions above the aquifer to the tune of 6.7M bullets a year and now handgrenades.

4)    Desecration of recognized ancestral and familial burial sites at Litekyan.

5)    The LFTRC ignores generations of deep history of landowner families who lived at Ritidian and were stewards of the land prior to its condemnation. These families continue to fight for its rightful return after it was taken under duress and without just compensation.

Out of all the many choices that DoD has on Guam, including expanding the four or five existing ranges, DOD selected the site that their own studies very clearly say will cause the most harm during construction and the most harm for the decades they will operate a Live Fire Training Range Complex. When Prutehi Litekyan asked DoD representatives at yesterday’s meeting why they chose the most harmful choice, they offered no answer. By choosing to cause the most irreparable harm, DoD is asking our community to sacrifice our one special place that we’ve held in trust for our children because it is convenient for them. This is absolutely not as good for us outside the fence as it is for those inside the fence.

Prutehi Litekyan pointed out to Admiral Chatfield and her aides that there is no rush in causing irreparable damage to Tailålo (Northwest Field), Urunao, Litekyan, Pahon, and Inapsan since the marines are not even scheduled to arrive on Guam until 2025 or later. Prutehi Litekyan has asked for a pause in the preconstruction activities and stop its irreparable destruction so that both sides have an opportunity to forge a way forward that truly is a One Guam approach. Prutehi Litekyan also asked for the pause in light of the pending lawsuit in the Northern Mariana Islands that may change the trajectory of the sites selected for the military build-up throughout the Marianas.

DoD’s response however, was to explain how they are planning to be careful and to mitigate the harm they were creating. When Prutehi Litekyan noted that this involved bulldozing some of the special elements of our environment including a limestone forest that took thousands of years to develop, DoD responded that clearing the forest would be an exciting opportunity for scientists and others to experiment with how to recreate, in a laboratory of sorts, over the next many decades, a forest that was naturally created over thousands of years. DoD’s position was tantamount to cutting down a 3,000 year old redwood tree just to see if it can be recreated.

When Prutehi Litekyan pressed that what it really wanted answers to why DoD chose the site that causes the most harm, the meeting was abruptly ended and the members were escorted to the parking lot by the Rear Admiral herself.

Prutehi Litekyan left with the statement that DoD’s actions at Litekyan will be written in our history books. It will be remembered.

We may be disappointed, but we’re not backing down. This is just the beginning. We haven’t even begun the fight yet. We will be calling out our senators who have remained silent on the adverse impacts of this range to our island community at a protest at 3:30 p.m. tomorrow, Sept. 7, at the Legislature before the 4 p.m. informational briefing for landowners and fishermen.

FOR IMMEDIATE NEWS RELEASE (September 6, 2017 – Hagåtña) – Vice Speaker Therese M. Terlaje (D-Yoña), Chairperson for the Committee on Culture and Justice, submitted a letter to Governor Eddie Baza Calvo yesterday, urging him to consider the irreversible impacts to historic sites, the environment, and ancestral lands with the clearing of limestone forests in Finegayan and Northwest Field for construction of the cantonment and Live-Fire Training Range Complex. Vice Speaker wrote with great concern about the preservation of primary limestone forest, ancient villages, cultural resources, and the continuing struggles for original landowners.  In her letter, Vice Speaker Terlaje asked the Governor to consider the following:

–        That the CNMI pending lawsuit may directly impact these firing ranges

“Certainly the destruction of our limestone forest and wildlife refuge can be put on hold temporarily, while the leaders of Guam work cohesively with government agency leaders and the people of Guam to ensure the preservation of our ancient villages and pristine resource,” Vice Speaker Terlaje wrote.

Vice Speaker Terlaje also humbly requested that these issues regarding Ritidian be addressed in the Governor’s discussions in Washington D.C., together with the economic impacts of the denial of H-2B visas and the payment of War Claims out of Section 30 funds owed to Guam.  Vice Speaker Terlaje further stated, “Settlement should include justice for the original landowners, preservation of historic sites, and protection of our limestone forests.”

The letter, which was also copied to Congresswoman Madeleine Bordallo, included maps of the proposed Surface Danger Zone at Ritidian/Litekyan and potential impacts, a copy of a complaint filed by the Tinian Women’s Association against the U.S. Navy, and the public notice for the September 7, 2017 Informational Briefing with Original Landowners at the Guam Congressional Building’s Public Hearing Room.

For more information, please refer to the attached letter from Vice Speaker Terlaje to Governor Calvo, along with the included attachments.