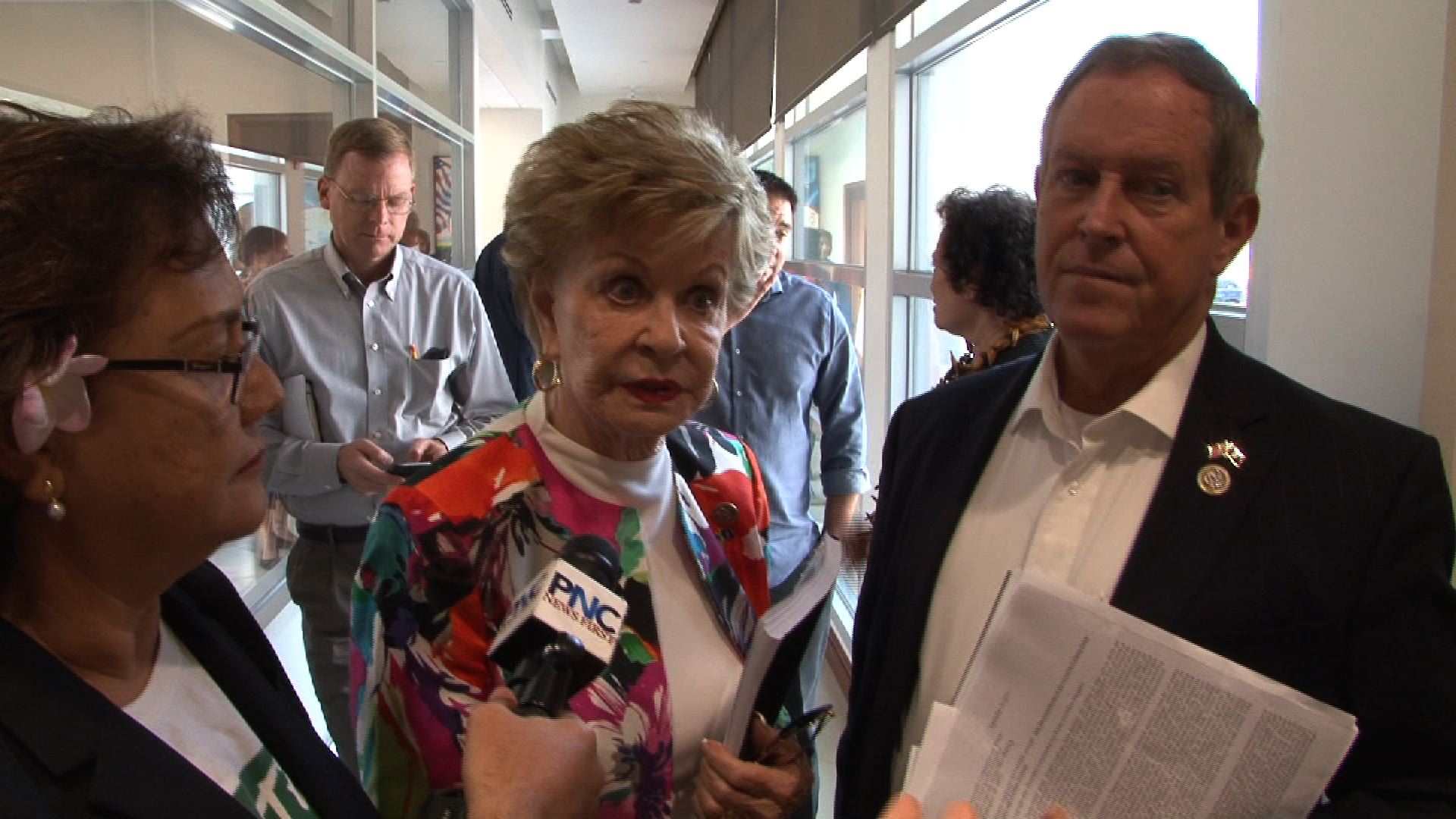 Members of the group Prutehi Litekyan confronted a Congressional Delegation after the CODEL met with members of the legislature this morning.

Guam – A congressional delegation led by South Carolina Republican Representative Joe Wilson is on Guam to look into some of the military assets here. Today(Fri.) they went to the legislature where they were unexpectedly greeted by members of the group Prutehi Litekyan or Save Ritidian which lead to a tense meeting in which Prutehi Litekyan members told the Congresswoman they felt betrayed by her.

“We feel that we haven’t had the opportunity really to speak to any of the congressional delegates about this very important issue and we’ve been wanting to come out in opposition of this firing range at Northwest Field and Litekyan” said Prutehi Litekyan member Maria Hernandez.

“I look forward to reading this and accepting it and it’s been my experience particularly at Parris Island that the archaeological sites that were discovered there actually it’s the military that discovered them,” said Congressman Wilson adding, “they’ve been respected and also archaeologically developed to be protected.” Wilson was referring to his experience with how the military handled the Parris island off the coast of South Carolina. Wilson is heading a congressional delegation that is on Guam to look at the island’s military assets but while here he and Congresswoman Bordallo met with local senators.

Members of Prutehi Litekyan or Save Ritidian were waiting outside of the Speaker’s office with the hopes of getting some facetime with the CODEL. Bordallo and Wilson did indeed take some time to meet with them and the group presented them with a petition of over 5,000 signatures against the placement of a live fire training range complex at the Northwest Field above the Ritidian Wildlife Refuge.

“The input that is taken from the community is highly respected. And I’m just confident the U.S. Navy and the Marine Corps that they will be proactive in protecting the cites and health and safety of the community,” said Congressman Wilson.

Prutehi Litekyan members thanked the CODEL for taking time to meet with them but they did not hold back when expressing their frustration. “Hundreds of people went up to a microphone to speak against this firing range sir and we’re hoping that you listen to our voices because right now we don’t feel represented by our congresswoman. She doesn’t really represent our people to the best of her ability,” said Hernandez. “It’s been my experience that a champion on the armed services committee and in every way has been Congresswoman Bordallo on behalf of the people of Guam and on behalf of a strong military and on behalf of defending the people of Guam and the people of the United States,” replied Congressman Wilson.

Former Senator and Prutehi Litekyan member Hope Cristobal then chimed in saying, “Sir there are many firing ranges on Guam and we are hoping you will find it in your heart to look at those others and not start a new one at Litekyan because the devastation will be great there and we will never be able to recover lost archaeology.” The Congresswoman interjected saying, “Do you agree with all the other firing ranges where they are?” “Well they are in the footprint right now,” replied Cristobal. “Because we don’t want to move forward and then be told no,” said Bordallo. “You can use the existing firing ranges there are at least four or five of them,” said Cristobal. Hernandez interjected saying, “Mrs. Congresswoman we’ve been speaking out to you for many years. The Ritidian families we’ve been coming to you for many years and you’ve betrayed us. We feel true betrayal.” Congressman Wilson then came to Bordallo’s defense again saying “The Congresswoman Bordallo stands up for the people of Guam.” However, another Prutehi Litekyan member replied saying “We beg to differ.” The Congresswoman herself then replied saying “It’s not that I haven’t brought these subject matters to the U.S. Congress but you can’t, you know, there’s 542 people in the congress.” Another Prutehi Litekyan member interjected saying “Why did you keep meetings in secret” “That’s not true, I love Guam. I love the culture,” replied Bordallo. “If you love Guam you would not have chosen Litekyan because it says even in your impact statement that it is the most adverse negatively adverse impact to the environment the people the culture and if you love Guam we do not want our lands to be desecrated to a mere toxic wasteland,” said another member of Prutehi Litekyan.

Both Bordallo and Wilson promised that they would look over the letters, petition and other documents that the Prutehi Litekyan members shared with them.