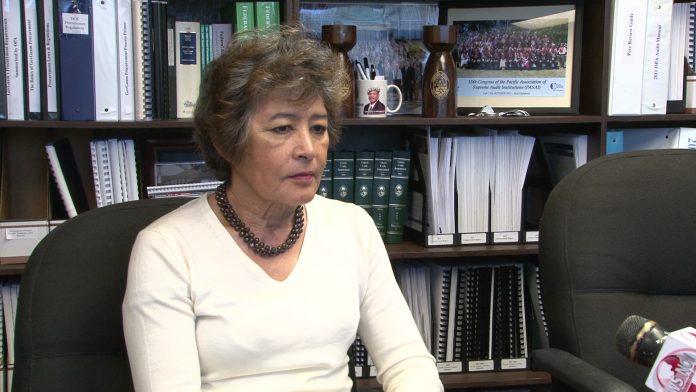 Guam – Public Auditor Doris Flores Brooks is calling for the end of the federal receivership of the solid waste authority. In an open letter she published online, Brooks says she’s now beginning to experience some of the tension she’s observed between federal receivers Gershman Brickner and Bratton and the Calvo Administration.

Public Auditor Doris Flores Brooks referred to it as bad blood, the back and forth between the government of Guam and Federal Receivers Gershman Brickner and Bratton, who have been at odds over management of the Layon Landfill.

“Literally four years of operation by the time any further action is taken and that’s a pretty long time to be under the eye of someone from afar,” laments Brooks. “What I understand is the board has been asking for this transition.”

Brooks believes the federal receivership of the Guam Solid Waste Authority has gone on too long. In an open letter published on the Office of Public Accountability website, Brooks says she was dismayed to learn that the receivership could be extended beyond 2015.

In April, Chief District Court Judge Frances Tydingco-Gatewood issued an order for GBB to come up with a new timeline in light of the new developments that will delay the end of the receivership. At this point, however, Brooks says Judge Gatewood should have enough information to be able to make an informed decision on this transition.

“What is the rationale why the judge chose not to proceed with the transition … in 2015? What is the rationale for that? Is that a good rationale? Because don’t forget, too the receiver is gonna have a biased input because as long as he is around, that’s a cost for him. To view him as objective is gonna be less than objective,” argues Brooks.

Brooks says she was made aware that the GSWA Board has not been allowed to hire senior leadership position. She believes starting the hiring process now would assist in a smooth transition for GovGuam, as opposed to a rough turnover of control of the agency.

“The part that was bothering me in talking to some of the board members, the receiver’s point is, okay, October 1st, whatever the date is, we stop, you begin the next day. Well you can’t begin a transition like that. You need to get your management team in place,” says Brooks.

Brooks also notes that compared to the rest of the Pacific Islands, Guam has made huge strides in improving its management of its solid waste.

“Guam, really, to my surprise and to my pride is further ahead. So is this good governance. To have a receiver continue? That’s the question I’m posing,” Brooks says.

You can read Brooks’ letter by clicking on the file below.