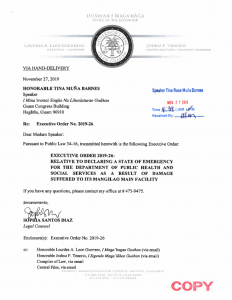 The Guam Fire Department has declared the main office building for the Department of Public Health in Mangilao unsafe and ordered the facility shut down, at least temporarily.

Governor Lou Leon Guerrero has declared a State of Emergency now exists for the department and that has freed up $250,000 to help cover the cost of the move and provide funds to lease new office space.

The first priority for the department is the preservation of vital statistics, according to the  statement from the governor’s office declaring the State of Emergency.

It started with an apparent electrical fire Tuesday night near  the height of Tropical Storm Kummari’s passage to the south of the island.

Security staff at public health noticed smoke coming from the building and the Guam Fire Department was called to the scene about 11:15 p.m.  A GPA crew shut down power to the facility.

When firemen entered there was smoke throughout the building said GFD spokesman Kevin Reilly. However they could find no evidence of fire.

The fumes were vented and an inspection of the electrical system was launched.

“Investigators were unable locate the point of origin,” according to a statement issued by Deputy Fire Chief Joey San Nicolas on Wednesday afternoon. However “other electrical hazards were found, and a notice to cease operations was issued until the hazards are corrected.”

“The safety of the clients and the employees of DPHSS is our main concern,” said the deputy fire chief. “Because several electrical issues had become apparent during the investigation, operations at the Mangilao facility will be suspended temporarily until they are corrected”

Public health director Linda DeNorcey said she is now coordinating the move to other public health or GovGuam facilities, as well as searching for suitable office space to lease.

The central facility building in Mangilao is closed until further notice, she said.

“Its not safe,” said DeNorcey in a phone interview with the Pacific News Center. “The building is so old, its a hazard.”

“The fire department has deemed that it can go up in smoke.  So it’s a fire hazard. So now I have to mobilize all our different services to different locations,” she said.

“All services processed at the Office of Vital Statistics, Division of Public Health, Division of Environmental Health, and Division of Public Welfare at the Central Facility in Mangilao will be moved to other locations,” states the release from public health. “Once new locations are identified and services become available, the public will be notified immediately.”

In her statement the governor said she is “working very closely with Public Health Director Linda DeNorcey and her team to ensure that Public Health can continue to provide services to our people.”

“We are acting decisively to find an alternate location for the agency so it can get operations back up and running,” said the governor. “The situation at Public Health is a result of benign neglect. I want to thank the firefighters who were there in the middle of a storm doing their best to fight the fire. And I join Guam in thanking them for their work.”

“The news that yet another critical health facility has been deemed structurally unsafe reminds us how vulnerable our government health care systems are while relying on old buildings under extreme conditions.

“Unfortunately, this crisis occurs in the middle of a dengue outbreak, Medicaid and MIP shortfall, and many other challenges the Department of Public Health and Social Services is actively addressing.

“As Chairperson on Health, I have committed my support to DPHSS Director Linda DeNorcey and the Department as they address these challenges. I am confident that Director DeNorcey, Deputy Director Laurent Duenas and their team will act swiftly to continue urgent services, preserve critical information, and resolve potential hazards to employees and the public.”