The Department of Public Health and Social Services has handed out 359 citations to nearly 300 businesses for violating the current PCOR 1 orders and one of those restaurants is Jeff’s Pirates Cove.

A citation is simply a form of warning for an establishment. The owners or managers can either fix the issue on the spot or, within 24 hours.

Janela Carrera, the department’s spokesperson, tells PNC News they got a call complaining about a gathering at Jeff’s the evening of Labor Day Monday. 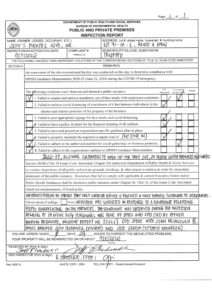 The citation issued to the restaurant claims that when Public Health officers showed up along with Guam Police, they found 25 active duty military personnel congregating around the premises.

Carrera says when Environment Health gets called in and it involves individuals/patrons, they call in GPD as well.

According to Carrera, the group had walked up to pick up their food from Jeff’s, then decided to sit around the property and the beach area to eat.

The restaurant was also warned about people not wearing masks in their vicinity (although the patrons were outdoors).

Carrera says while they’ve been citing restaurants for some time, they’ve been more minor issues and she hasn’t seen an incident to this degree.

“I’ve not heard of this yet, I’m not sure if it’s happened in the past but this is the first time I’ve heard of a large gather of individuals, military or not, where they were congregating and ordering food, then coming into the establishment and picking up their orders. For the most part, businesses and restaurants have been pretty compliant and people call in for their take-out or food, they’re pretty compliant,” Carrera said.

Joint Region Marianas LCDR Rick Moore issued a statement to PNC News saying that “Joint Region Marianas (JRM) is aware of the incident and is coordinating with local public health and law enforcement officials to determine if active duty service members were involved.”

He goes on to say that, “JRM is committed to doing our part to preserve public health and prevent the spread of COVID-19 in the community. If any local establishment is found to be operating in unsafe conditions, including noncompliance with public health orders or other applicable laws, JRM will not hesitate to implement Armed Forces Disciplinary Control Board (AFDCB) processes.  Potential consequences of the AFDCB process may include an establishment’s being placed off-limits to service members on a temporary or permanent basis.”

For his part, Jeff Pleadwell, the restaurant’s owner, says the military members came through to pick up curbside service and then walked onto the other side of the property to eat on the beach area.

Pleadwell says he wasn’t there for the specific incident but is now writing the required report for DPHSS. He says the Environmental Health officers present were pleasant and the whole exchange was civil.

But, he does question the logic behind the citation and how long this lockdown can be sustained.

“The gathering was more than two people, it was like, people going around together. And I guess, they could have just eaten in their cars, but I didn’t realize that, with social distancing and everything else, it’s still not permissible for people to go to areas outside of my restaurant,” Pleadwell said.

He added: “I feel this, firstly, the lockdown situation is really hard on everybody. I mean, people are stressing out left and right, I have people here that usually use my restroom and I can’t even allow them to come in and use my restroom, it’s only for the employees. I don’t think that’s very fair. And, I feel like there’s not enough conclusive evidence that people are dying left and right from this so everybody has become so afraid and I think it’s tough.”

Pleadwell says curbside is only about 10% of his normal business and he’s had to lay off employees in the face of the downturn.

He says people are too afraid of COVID in his opinion and that, much like mumps, measles, and other diseases, we’ll get through this too.