Governor Lou Leon Guerrero this afternoon is scheduled to announce her recovery plan during her 1 pm internet news conference.

As the governor and her medical advisors have repeatedly said, the expanded testing program now underway will guide GovGuam as restrictions are gradually lifted.

But both the Governor and her physician advisory team caution that we should be prepared for some restrictions to remain in place during the months ahead to ensure that the second wave expected this fall remains as moderate as the first wave that has just passed.

At Wednesday’s online news conference from the governor’s office, Dr. Felix Cabrera presented the physicians advisory group’s latest update on the current state of the COVID-19 crisis on Guam

“As you can see in the blue, here is our total number of COVID-19 cases. The green line here is our new case count per day. And then the purple is the hospitalization of our COVID-19 cases. And as you can see, it’s been going down and down and this here, April 29th, this is actually correct. We have now zero COVID-19 patients admitted at GMH,” Dr. Cabrera said. 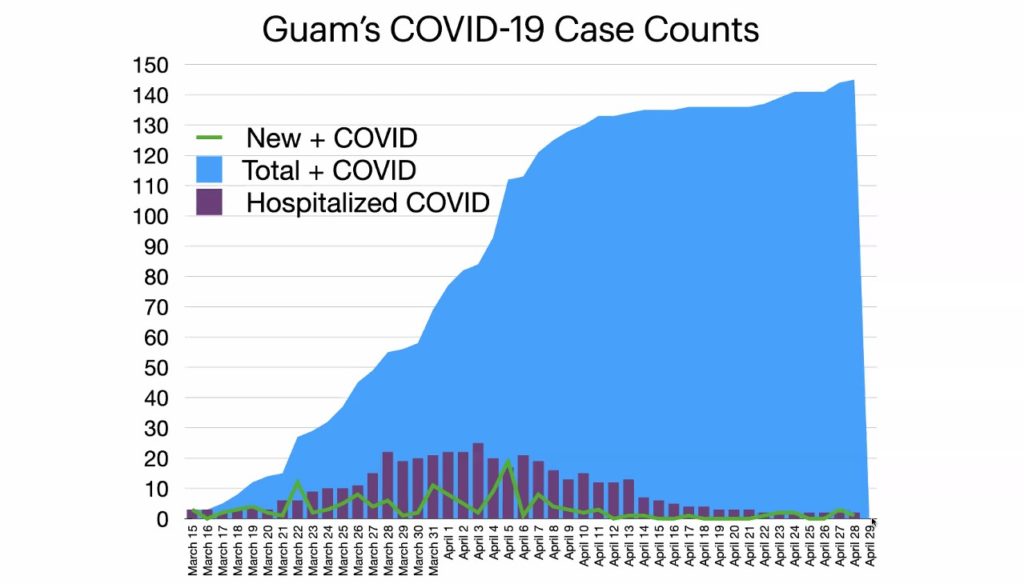 The first phase of the outbreak is past, said Dr. Cabrera, and the current status of the disease on Guam rivals South Korea and other countries who have flattened their curves and brought their outbreaks down to manageable levels, he said.

“What’s really encouraging is actually the daily test positivity rate in relation to the daily positives overall. The solid green line you can see is extremely low. It’s below point-5 percent and if we stay below that here, it’s confirming that the pandemic is even more controlled after the initial surge,” the doctor said. 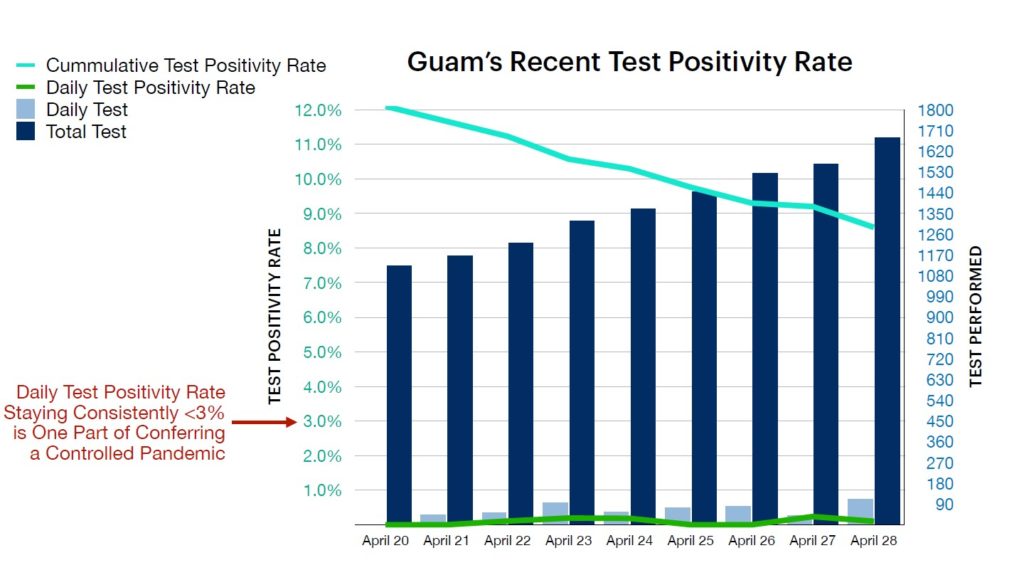 If the current trend continues, Cabrera said the second wave of the disease that is projected to hit by September or October may be no worse than the first phase.

“That’s assuming that we do everything correctly in our re-opening phases. The short answer to that is, by itself, it will be equal to a really bad flu season. So it will be that there are several more admissions to the hospital, maybe something not unlike what we’ve seen this first wave,” Dr. Cabrera said.

When PNC asked if the situation can still worsen, Dr. Cabrera answered: “There is still the potential for that and that’s the reason for all the preparations and readiness that we’re doing because we know what the potential is,” the doctor said.

Dr. Felix Cabrera said: “As we start taking more risk in terms of re-opening that’s still going to have to be a very controlled state in order to do that in a responsible way. That usually falls under a declaration of emergency. We are not necessarily going to define that timeline. The virus is going to determine that timeline.”