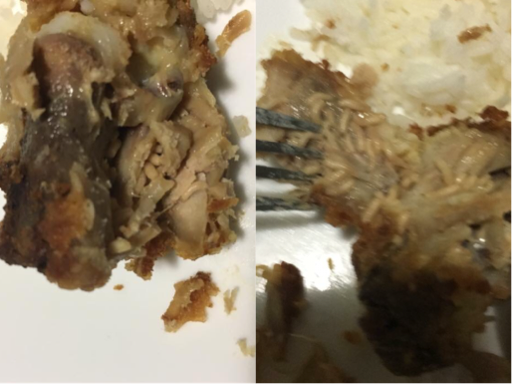 A picture of what appeared to be maggots all over fried chicken circulated social media.

Guam – The Department of Public Health and Social Services is investigating a claim of maggots being found inside of fried chicken from Josie’s Batchoy in Dededo.

A photo was posted on Facebook by Darlene Usalla Jabingay showing what appears to be fried chicken with maggots spread all over. Her caption read “I just bought this from Josie’s Batchoy in Dededo for lunch today as TO GO and found maggots inside the fried chicken. Never will I eat there again.”

Jabingay says she reported the Filipino restaurant to Public Health which conducted an inspection today.

Environmental Public Health Officer Claire Barati says that a number of violations were cited but Public Health could not substantiate the claims made by Jabingay as they can only base their findings on their inspection.

Barati , however, says they did make a few findings to include a couple flies in the facility, foods that were below the recommended temperature, wiping cloths that were not stored in sanitizing solution, single service items that were not stored properly in the buffet area, an accumulation of grease on the stove and no splash guard in between hand washing sink and prep sink.

None of these violations, however, rose to the level of being an imminent health hazard, said Barati. Josie’s Batchoy received a letter grade “B”.

The restaurant’s cashier Ruth Soriano, meanwhile, tells PNC that they keep their facility clean and that their fried chicken is always fresh and never recycled.