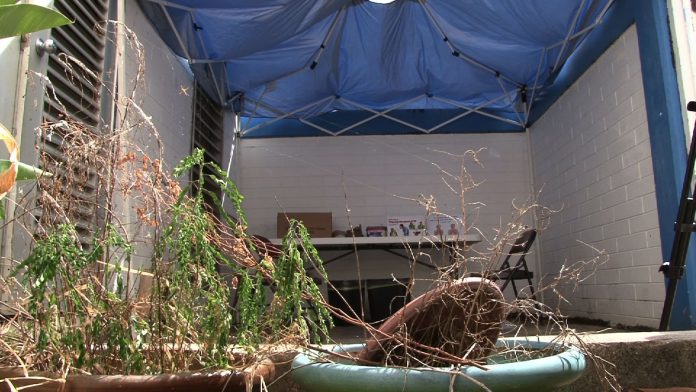 DPHSS says they’ve identified a possible alternative for an isolation room at their Northern Community Health Center in Dededo.

Guam – The Department of Public Health says they are one step closer to finding another location for an isolation room for tuberculosis patients.

For now, some patients are being treated outdoors in a makeshift holding area. But the agency assures that there is no public health risk or any spread of the disease.

We first learned about the makeshift tuberculosis isolation room through concerned residents, so we visited the area and indeed found that some TB patients were receiving treatment in the area which is directly next to a mechanical room just outside of the Department of Public Health and Social Services building in Mangilao.

It’s out in the open and the only thing covering it is a tent to protect from the sun. But Acting Public Health Director Leo Casil assures us that while this method is inconvenient, it is not a danger to the public.

“With TB cases, if it’s outside in the air, it’s not to where people can get contaminated, it’s actually even safer outside because once the air hits it, it just dissipates into the atmosphere. So really there should be no concern about that and that’s why we have it out there like that for now,” explains Casil.

The reason it was relocated to a makeshift outdoor area, says Casil, is because the TB isolation room is down for renovations.

“We’re trying to renovate the isolation room and it’s been there for a while and one of our fans went out of commission. So because of that we had to find a temporary holding place and that’s why we have it out there,” he notes.

Casil says they’ve already identified a new location, up at their Community Health Center in Dededo. We visited the potential isolation room along with some Public Health staff who were assessing the area to submit the specs and details to GHURA in an effort to get federal grant funding.

Program Coordinator Abraham Mora says the room in Dededo is currently being used for storage, but if approved, it will be turned into an isolation room. One of the changes that need to be made is to place an exhaust in the room that meets the minimum standards for ventilation.

Poor ventilation, says Casil, was the problem they were having with the isolation room at their Mangilao location.

“It’s what they call a negative pressure,” Casil says is what’s needed in the isolation room. “It sucks out all of the–it goes out into the atmosphere. So once it goes out, whatever virus or what, it’s gone. But since it’s not working and then we looked at it and so we said it’s time to repair this.”

Acting TB Manager Estelle Ada says that the isolation room went down last week and depending on how fast the grant funding can be approved and procurement contract could be generated, they are hoping to move patients back into a proper isolation room soon.

For now, she says, referrals will be taken in their temporary holding location. She says they are also conducting Directly Observe Therapy, which means TB patients are treated at home to minimize the risk of the spread of the disease.