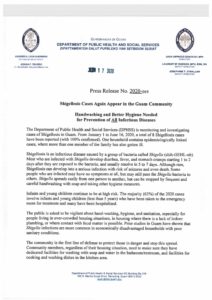 The Guam Department of Public Health is reporting that they have identified 8 cases of shigellosis on Guam.

Shigellosis is an infectious disease caused by a group of bacteria called shigella.

Most of those who become infected develop diarrhea, fever, and stomach cramps a day or two after they have been exposed to the bacteria. Shigellosis usually resolves in 5 to 7 days.

In a Wednesday news release, Public Health reports that they are “monitoring and investigating” the cases which have been identified since the start of the year.

“One household contains epidemiologically linked cases where more than one member of the family has also gotten ill,” states the release.

Although rare, shigellosis can develop into a serious infection with risk of seizures and even death.

Some people who are infected may have no symptoms at all but may still pass the shigella bacteria to others.

Shigella spreads easily from one person to another, but can be stopped by frequent and careful hand washing with soap and taking other hygiene measures.

The public is asked to be vigilant about hand washing, hygiene and sanitation especially for people living in over-crowded housing conditions where there is a lack of indoor plumbing, or where contact with fecal matter is possible.

All health care providers on Guam are urged to be on alert for possible cases of shigellosis and to promptly report suspected cases to the Bureau of Communicable Disease Control at – 735-7136.

For more information on the disease you can also call the Public Health Epidemiology and Laboratory Capacity Program at 777-1706.