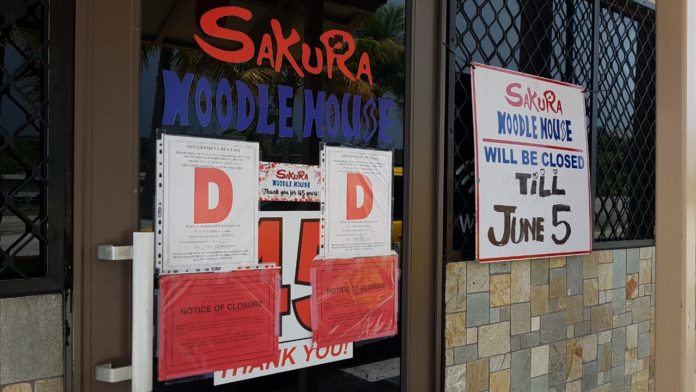 Guam – Sakura Noodle House, a staple in Guam restaurants, is the latest food establishment to face the wrath of Public Health inspectors.

With 82 demerit points and a D grading, Sakura Noodle House was shut down Wednesday night.

An inspection report indicates an active cockroach infestation was mostly to blame for the closure of the restaurant.

Public Health says they received a complaint from a customer who observed cockroaches throughout the dining area of the restaurant. Sure enough, inspectors say they found evidence of an active cockroach infestation.

Numerous live roaches were observed in the paper towel dispenser, frass was observed throughout the restaurant’s back wall and egg casings were also seen throughout the dining area.

Inspectors report that they also received a complaint about food being slimy and smelly but Public Health was not able to find evidence of the complaint.

The report also indicates numerous other violations, like stained cutting boards, moldy and rusty chillers and walls, beverages being stored directly on the floor, and an “obnoxious” odor inside the men’s restroom, among a host of other violations.

You can read the full inspection report here.