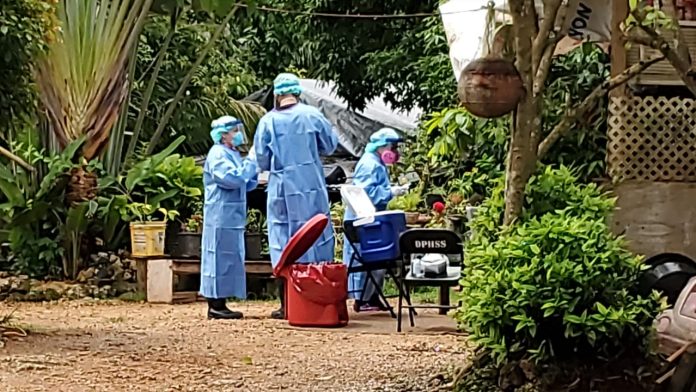 Public Health’s Rapid Engagement Team wrapped up testing at the Gil Baza and Zero Down subdivision in Yigo yesterday.

A total of 131 samples were collected and 36 people tested positive.

The Rapid Engagement Team began testing in the area last Thursday in response to a spike in the FSM community there.

The team also took advantage of the opportunity to address social service and public assistance needs in the area.

All testing was voluntary, and some residents refused testing.

The Joint Information Center had previously reported that 33 samples from the Yigo outreach tested positive, but later issued a correction.

The Rapid Engagement Team’s efforts were assisted by partners such as the Governor’s Office, Guam National Guard, Yigo Mayor’s Office, Homeland Security, the Guam Fire and Police Departments, the FSM Association of Guam, and the FSM Consulate office.

Public Health spokesperson Janela Carrera says the Rapid Engagement Team’s next step after completing the Yigo mission is to regroup, examine the latest data, and stand ready to respond to any new areas of concern that might arise.