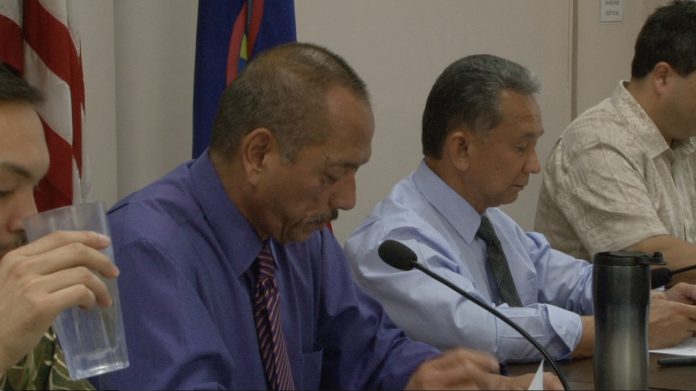 However, support for the wage increase showed up as well.

Guam – Residents packed the public hearing room yesterday to testify for and against Vice Speaker BJ Cruz’s proposal to raise the minimum wage.

The public hearing room yesterday filled with residents, workers, retirees and small business owners, all who either supported or opposed bill 312, which, if passed would incrementally raise the minimum wage to 10.10 an hour by January 2018.

Elizabeth Grace Sablan Cruz, with the help of her daughter, made it known to Senator Cruz that she did not support raising the minimum wage

“As a retired worker, I would like to tell Vice Speaker Cruz, shame on you for using his office and authority as an elected leader to introduce such detrimental legislation to people, who like me, who have no opportunity to receive an increase in my monthly income, you’d have to pay for the complications for the increase in cost of living, and yet all of you, who were re-elecetd four years ago supported a pay increase to each of you personally, said Cruz.

However, support for the wage increase showed up as well.

“Poverty perpetuates poverty and wealth perpetuates wealth. The vast majority of poor people are poor despite their willingness to work hard because our economic system exploits cheap labor wherever it can, I’m not here to tell you that hard work is not worth it, I’m simply here to remind everyone that hard work is necessary at least for our working families but its not sufficient to get ahead.  The game is rigged, against the many and stack is decked against the poor,” said local attorney John Bordallo Bell.

On mornings with Patti on K57 this morning, Vice Speaker BJ Cruz said that he would be moving forward with his minimum wage increase despite the opposition. He said he would compromise by exempting small businesses from the increases.