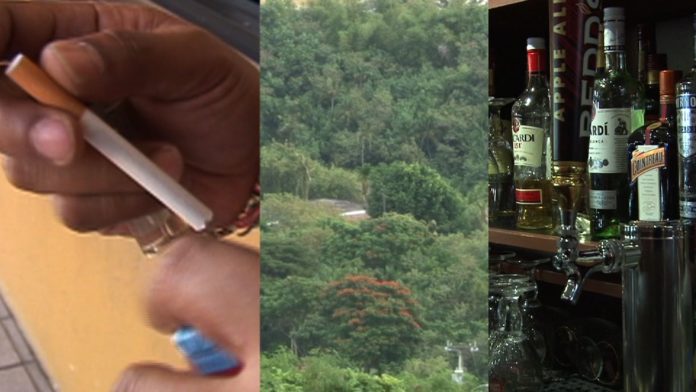 Guam – Senators held a public hearing on Speaker B.J. Cruz’s bill 260 which creates an excise tax on alcoholic drinks and increases current taxes on tobacco to go towards the healthy futures fund. They also held a hearing on the Speakers bill 261 which raises real property taxes.

“I was hoping to reduce the sales tax to one percent or even less if we can find alternative sources,” said Speaker B.J. Cruz.

One of the alternative sources Speaker Cruz is looking at is real property taxes. He introduced bill 261 to raise taxes on the improvements to real properties. The bill does not increase taxes to undeveloped lands.

Speaker Cruz also introduced bill 260 to create excise taxes for alcoholic drinks that are not manufactured on Guam and increase current taxes on tobacco. These taxes would then go into the Healthy Futures Fund and $9.2 million from this fund would go to GMH for FY2018 operations.

Proponents of the bill like it because it discourages the use of alcohol and tobacco while generating funds that improve healthcare and the treatment of addictions to these drugs.

“When you consider that alcohol and tobacco are significant causation factors in Guam’s dramatically escalating non-communicable disease rates I think anything that we can do to slow down that increase is worth doing,” said Citizens For Public Accountability Spokesman Ken Leon Guerrero.

“These taxes levied on these products locally have been used to fund local services and programs including alcohol and tobacco intervention cancer related programs health education hospital services etc.,” said Cathy Rivera Castro who testified in favor of bill 260.

Opponents of the measure say that it unfairly taxes local distributors while allowing alcohol and tobacco on base to go untaxed and they say it encourages a black market.

“Bill 260 does not make any provisions for increased enforcement. We know that there is a large amount of what we call leakage of products coming out of the military bases. We see that every day as distributors when we go out into the markets. We see products being sold in bars and being sold in stores that we know are not our product,” said CFO of Western Sales Trading Co. and ST Corp. Ricardo Duenas.

“Who pays for all this? Well initially the wholesalers. Another question is who pays eventually? Not the wholesalers, not the retailers, the consumers. And third and probably the most important issue here is who benefits? The military,” said Ambros Distributors President and CEO Frank Shimizu adding, “Another alternate source for all of these products. That source does not pay any taxes and they do not pay any freight. And they operate on a smaller margin and they don’t pay rent, they don’t rent a warehouse. So, they’ve got a terrific head start on the local wholesalers.”

Bank of Guam economist Joe Bradley testified on behalf of the Guam Bankers Association in favor of increasing property taxes because the property taxes on Guam are the lowest in the nation.