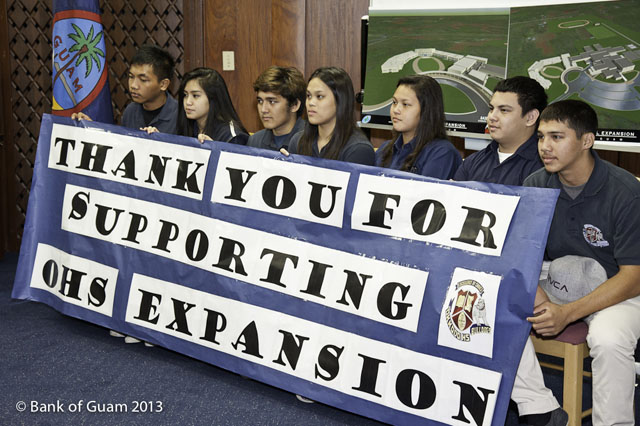 Guam – Okkodo High School’s long awaited expansion project can now begin, now that the project has been financed through a $21.8 Million loan to the Government of Guam from the Bank of Guam.

The signing of the loan was celebrated with a press conference at the Governor’s office this morning. The loan will fund the purchase of certificates of participation, which will be paid from federal section 30 money while the school is leased from the Guam Education Financing Foundation. After 20 years the school will revert to the department of education’s ownership.

Okkodo High School currently has 1,350 students while its only built to hold 1,200 students. The project will increase the school’s capacity to 2,000. The expansion include will 24 new classroom, 7 science labs, a culinary arts facility and improved athletic facilities. Principal Rita Flores says this will allow Okkodo to offer more programs to students.

“Our students most especially are excited because we will be offering additional programs to include culinary arts and allied health and a true freshman academy,” Flores told PNC.

The expansion is expected to be complected by August 2014.

READ a news release about the loan from the Bank of Guam below:

Guam – The Board of Directors, Management and Staff of the Bank of Guam are pleased to announce the signing of a $21.8 Million loan for the purchase of Certificates of Participation to fund the much-needed expansion of Okkodo High School.

Currently built for 1200 students but overcrowded at 1500 at its opening, the expansion project will increase capacity to 2000 students, while also funding athletic facilities improvements, the development of a ninth grade academy and a special culinary teaching facility. Traffic light signalization will also be added to minimize existing congestion and improve traffic flow. The expansion is expected to be completed by August, 2014.

The expansion is funded by the sale of the Certificates of Participation which will be paid back by a 17 year lease by Government of Guam, funded by Section 30 monies, which was authorized by the 31st Guam Legislature in August 2010, becoming PL 31-74. The Government of Guam, through the Section 30 revenues, will lease the school from Guam Education Financing Foundation (GEFF) for 20 years, after which time the school will revert
to Guam’s Department of Education for $1.00. GEFF will maintain the project, providing custodial services, capital maintenance and insuring the project.

Lou Leon Guerrero, Bank of Guam President, CEO and Board Chair stated, “Bank of Guam is pleased to once again step up to provide the financing requirements necessary to meet the education needs of Guam’s students by eliminating the overcrowding at Okkodo, while enhancing the overall educational value of the institution by improving athletic facilities and a special culinary teaching facility.”