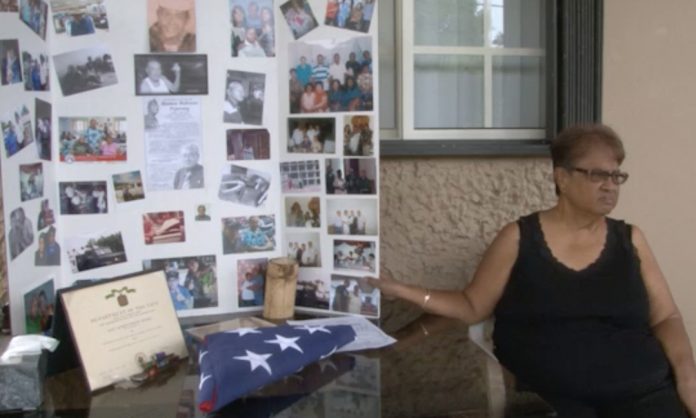 A Vietnam veteran who was a recipient of the Purple Heart and who retired from the U.S. Navy after 20 years of service was buried on Wednesday without full military honors. The family of Ramon Babauta Fejarang says they are upset and disgusted with the way his funeral was handled.

“I was shocked and sad and disgusted,” said Mrs. Fejarang. Lupe Fejerang wife of Vietnam Veteran purple heart awardee and U.S. Navy retiree Ramon Babauta Fejarang says she kept her mouth shut when her husband was buried without full military honors at the veterans cemetery but now that she and her family have thought about it they are speaking out in the hopes that this isn’t repeated to any other families.

Her son Jeffrey Fejerang says there was no gun salute no taps and his brother in law who just happened to be attending the funeral in uniform had to present the flag to his mother. “It’s insulting you know a lot of people on island who have given up their time, their life, their family just to go serve our country this is what they get when they pass? It’s really frustrating,” said Jeffrey Fejarang.

So why wasn’t Fejerang given full military honors? Well Jeffrey says they’ve been given different answers. “It’s been a bunch of pointing games, blaming games on each other,” said Jeffrey.

Fejerang says that it eventually boiled down to intercommunication He was told by the Office of Veterans Affairs that they sent an email to the Navy to arrange for an honor guard but somehow the Navy never received it. “However it’s still unacceptable One email. What’s their policy? What’s their standard operating procedure? If an email’s not to be replied what else do they do? Do they pick up a phone make a call? Do they send a fax? Something. Do they go there? Nothing. It was just relied on one email with no follow through,” said Jeffrey.

Then during a Veterans Commission meeting yesterday(Thurs) Fejerang says that the Guam Office of Veterans Affairs Administrator John Unpingco apologized and offered to have an honor guard perform the ceremony this Saturday at the cemetery. “Its too late. He’s already in the crypt. He’s already been blessed to be buried and they’re doing it how many days after?”

Office of Veterans Affairs Administrator John Unpingco has not returned our calls for comment.