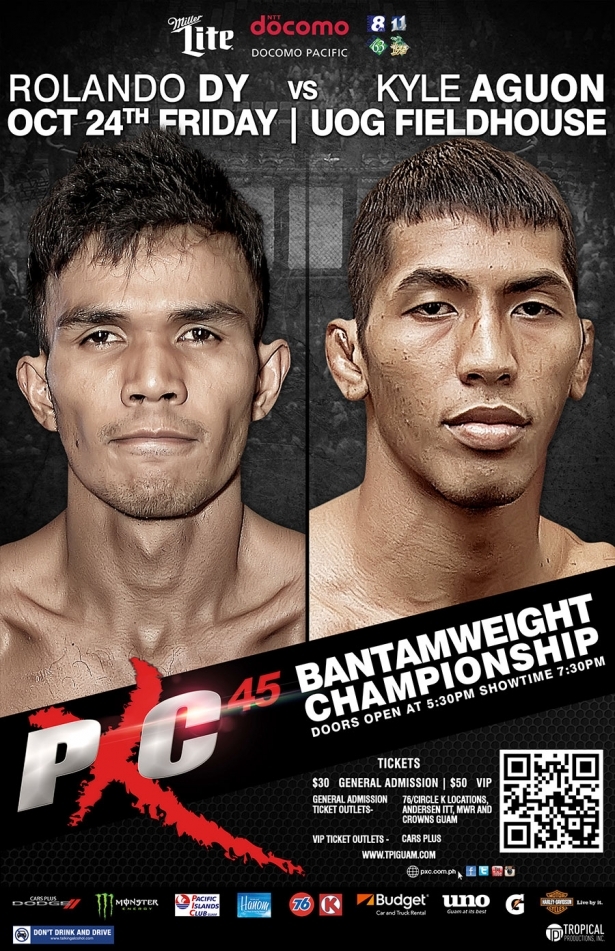 (PRESS RELEASE)(October 20, 2014) – As the countdown to PXC 45 continues to wind-down, the anticipation only rises. This Friday, October 24th – the newly named, “Calvo Field House” will be overflowing with adrenaline from both fighters and fans! PXC has put together another killer fight card for the company’s 45th event to date.

“Fight night is going to be intense. Expect a lot of action with the card that we’ve put together – especially the main event”, said PXC-CEO, EJ Calvo. Guam’s own Kyle Aguon will go toe to toe with one of the Philippine’s most fierce scrappers – Rolando Dy. Watch as these two battle for the PXC Bantamweight Championship title.

On a quest to continue his success, Kyle “Boom” Reyes will also set foot inside the Terrordome. Reyes will square off against Alex “The Hulk” Volkanovski as the Featherweight fight of the night. The sole female match is also a featherweight bout between local sensation – Brogan Walker, and Korea’s Yoojin Jung. And it doesn’t stop there. To top things off, five more fights are set to take place.

Don’t miss a second of the excitement! Tickets are going fast, so be sure to reserve your seat today. Tickets are on sale now for $30 General Admission at 76 Circle K locations throughout Guam, MWR and Andersen ITT, Tu’Re or online via www.tpiguam.com. VIP tickets are $50 and available at Cars Plus in Maite and also online at www.tpiguam.com

For more information on PXC 45, check out www.pacificxtremecombat.com, visit us on Facebook or contact Ken San Nicolas at 688-5565.