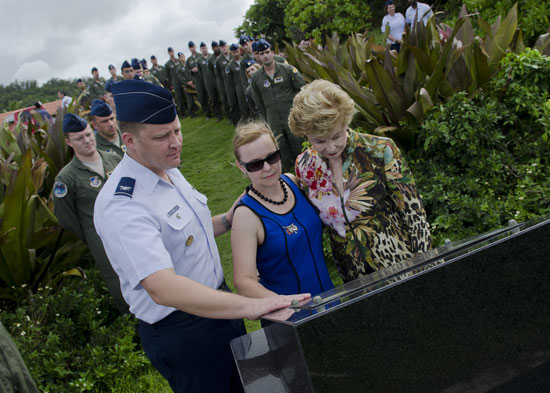 ANDERSEN AIR FORCE BASE, Guam – Members from the 69th Expeditionary Bomb Squadron, currently deployed here from Minot Air Force Base, N.D., gathered together with representatives from the government of Guam July 21 in Adelup, Guam, to honor the six Airmen of Raider 21 who passed away during a flyover for Guam’s Liberation Day parade six years ago.

The ill-fated aircrew took off from Andersen July 21, 2008, in a B-52 Stratofortress with the Raider 21 call sign to perform a flyover at the 64th Guam Liberation Day parade. They were then supposed to continue on a training mission. However, they crashed into the ocean five minutes before their scheduled show time, killing all six Airmen. It was concluded by the accident investigation board that the crash was caused by a mechanical failure in one of the aircraft’s wings.

“Honoring our fallen aviators pays tribute to their sacrifice and demonstrates to their families and loved ones that we have not forgotten and still mourn with them,” said Lt. Col. Matthew McDaniel, 69th EBS commander. “The legacy of Raider 21 and the men who flew that day will always be a part of who we are in the B-52 community.”

“Having the monument at the governor’s complex, especially with its view of Tumon Bay and Andersen Air Force Base in the distance, shows how much the crash of Raider 21 impacted the Guam community,” McDaniel said. “It demonstrates the importance of our mission to the island and its leadership.”

With the exception of the flight doctor, the Raider 21 crew was deployed to Andersen from Barksdale Air Force Base, La., in support of the U.S. Pacific Command’s continuous bomber presence. The CBP mission is to help maintain stability and security for the Asia-Pacific region. This gives the deployed Airmen the opportunity to become familiar with operating in the Pacific theater. It also provides training opportunities for bomber crews to integrate into PACOM join or coalition exercises, operations and training.

“I feel proud to be an Airman and B-52 bomber aircrew,” said Capt. Ryan Loucks, 69th EBS flight chief. “These men were all either deployed here with the 20th EBS participating in continuous bomber presence or supporting it as members of the 36th Wing, which is the same job that our squadron is doing on a daily basis.

“We will never forget the men of the crew of Raider 21 or their loved ones; they will be with us forever.”