Cruz and Jurado, both high school tennis coaches, broke Cepeda’s serve twice for a chance to serve out the match at 5-3. The junior champions tied the game at 30-all when Cruz netted Penafiel’s tough approach shot, but the students succumbed to Cruz’s serve on the next two points to concede the match.

Cruz and Jurado next face No. 1 seeds Daniel Llarenas and Alexander Ornbo in the semifinal SUNDAY at 11 a.m. at the Hilton. In the bottom half of the draw, brothers Takuya Saito and Yusuke Saito will face Jang Ha Kang and Wendell Roden in the other semifinal at 12:30 p.m. tomorrow.

In the Men’s 4.5 Doubles division, Jeff Bristol and Craig Tsuda’s 7-5, 6-2 earned a semifinal berth with a win over Robert Mendi and Freddie Calaranan. Bristol/Tsuda will face Sam Lai and Jimmy Tsang, 6-1, 6-1 winners over Joven Acosta and Darryl Navarro. In the bottom half of the draw, Alfred Chan and Eun Sung Jang, 6-3, 6-4 winners over Swami and Yusuke Saito, are set to face No. 2 seeded Penafiel and Cepeda. Penafiel and Cepeda outlasted David Lai and Masakazu Takahashi 6-4, 7-5 in the quarterfinals.

Peter Aguilar and Patrick Calilung upset No. 6 Victor Tuncap and Brian Tuncap, Jr.. 1-6, 6-4, 10-8 and will next face Albert Cayanan and Yeong Park in the quarterfinals. Cayanan and Park upset No. 3 ranked Mark Joseph Burgos and Nicko Inocencio, 6-4, 6-3. Pedro John and Emil-Krisnan Penafiel defeated Tom and Camden Camacho 6-3, 3-6, 10-6 to next face No. 2 ranked Joshua and Jeremiah Gallego in the quarterfinals. The Gallegos won 6-1, 6-1 over Venfred and Van Gastilo earlier in the day.

Ray Miranda and Jonathan Frasco will next face No. 1 seeds, Bristol and Sam Lai in the quarterfinals of the Men’s 45+ doubles division after defeating Preston Antonini and David John, 6-3, 7-5.

In women’s matches, No. 1 ranked Michelle Pang and partner Liza Provido earned a berth in the finals of the Women’s Open Doubles division with a 6-3, 6-0 win over Chloe Gadsden and Diane Lee. 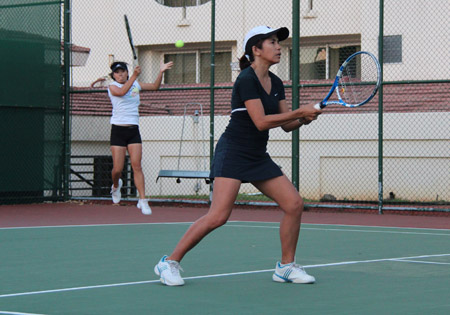 [Liza Provido hits a backhand as partner Michelle Pang looks on in a Women’s Open doubles match against Diane Lee and Chloe Gadsden.]

In Women’s 45+ doubles, Atsuko Yamauchi and partner Migu Goodman upset No. 2 seeded Liza Provido and Margaret Terry, 6-3, 6-0 and are set to face No. 1 seeds, Julie Bollinger and Rosalie Cao, in the final. Bollinger and Cao defeated Joan Gill and Annie Gayle 6-0, 6-1 for their finals berth.