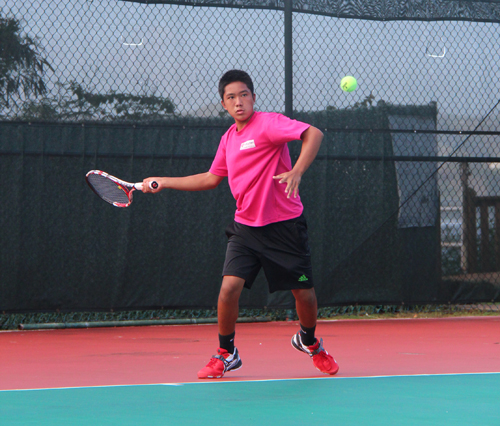 Guam – About 150 entries were submitted to compete in a total of 130 matches for the first weekend of the 2014 Quality Cup tennis tournament set to begin Friday.

“This is an awesome turnout for the first weekend of play, especially for the juniors,” said Joe Cepeda, tournament director. “I’d really like to thank Quality Distributors for stepping up to support tennis in the community with this tournament, which continues to gain popularity among local and regional tennis players, and also for helping to improve junior tennis development, particularly for those who are looking to gain valuable USTA points to help with their junior ranking.”

VIEW the schedule for the Quality Cup Tournament HERE

The tournament will officially open at 5 p.m. Friday with an opening ceremony at the Hilton Guam Resort & Spa tennis courts. The community is invited to participate in or watch a one-point tournament and other activities. Complimentary Haagen Dazs ice cream will be available for those who attend the opening ceremony.

The junior division matches – both singles and doubles – officially begin Saturday morning at three different venues: Hilton, Sheraton Laguna Guam Resort tennis courts, and the Rick Ninete Tennis Center in Hagåtña.  Of the players entered to play in the junior division, four are from Saipan. Guam’s Brian Tuncap, Joshua Cepeda, Mason Caldwell, and Gabriel Tan are top-seeded players in the U18, U16, U14 and U12 singles divisions, respectively. Camdyn Nadler is the No. 1 seeded player in the Girls’ U18 and U16 divisions. Julia Ishikawa is the No. 1 seed in the Girls’ U14 division. In the Co-Ed U10 division, Dakota Gibson and Kaia Malakooti are the top seeds.

[Joshua Cepeda prepares to return a serve during a junior division match of the 2012 Quality Cup tennis tournament at the Sheraton Laguna Guam Resort tennis courts. Cepeda won two juniors titles in the 2012 edition of the biennial tournament – the U16 and U14 doubles divisions, and also was a finalist in the U16 Singles division. Cepeda returns to the 2014 edition of the tournament, set to play in both the U16 and U18 divisions.]

The complete draw and schedule of matches this weekend is available for view and download online at www.tennisacademyguam.com. Draws also will be posted at Hilton, Sheraton and the Rick Ninete Tennis Center.

A detailed information sheet about the tournament, as well as registration form, is available for download on the www.tennisacademyguam.com Web site. Inquiries may also be directed to Cepeda by calling 988-7479 or through E-mail at joe@tennisacademyguam.com.