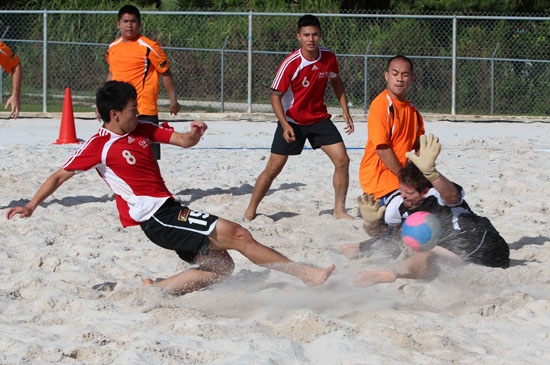 Guam – Quality Distributors won twice to stay all alone atop league standings in the opening day of the 2012 Land Shark Beach Soccer League Sunday at the Guam Football Association facility in Harmon.

Following Quality Distributors in the rankings are the Paintco Strykers with one win and one loss. Doosan FC and the Bank of Guam Crushers finished the day with one draw and one loss each.

After the Crushers and Doosan FC battled to a 4-4 draw in the afternoon’s second game, the Crushers took to the sandbox almost immediately after to face Quality Distributors. Despite a valiant effort by the Crushers, Quality outscored its opponents in all three periods of play, finishing with a 14-5 victory.

Quality’s Matt Cruz led all goal scorers with four. Irving Mercado finished with a hat trick and teammates Joe Cruz and Rodney Camacho each netted two goals. Kai Cryster and Kevin Huang added one goal each to Quality’s goal tally. Quality’s other goal came from a Crushers’ own goal.

Rico Espinosa struck twice for Bank of Guam and teammates Alfred Agahan, Jaime Ortega and Serjay Urbano each scored once.

Although the Strykers conceded their first game to Quality via forfeit, Paintco gathered enough players to win against Doosan FC 6-5 in the day’s final match.

The game was far from over for Doosan, as Sean Lowe led his team’s third period charge after bulldozing through two defenders and finishing the play with a shot past the Strykers’ keeper Julio Gonzales. Moments later, Hashimoto, who went scoreless in the second period, found an opening in Paintco’s defense and blasted a shot from the middle to make it a 5-4 game.

Following Hashimoto’s goal, the Strykers’ Hiro Asoshina scored right from the ensuing kick off to give his team a 6-4 advantage. Immediately after, Hashimoto followed suit with a kick-off goal of his own for the 6-5 score. Paintco was able to hold down its opponents in the final two minutes of play for the win. The Strykers had many opportunities to extend its lead, but brilliant blocks by goalkeeper Cody Cruz shut down Chargualaf and Staman in the final period.

Doosan FC’s other goal came from Justin Samonte in the second period.