Guam – Quality Distributors scored four goals in the second half to knock out the dck Masters from 2012 Bud Light Women’s Futsal playoff contention Sunday at the Guam Sports Complex gym in Harmon.

As expected with the do-or-die game situation for Quality and the Masters, the meeting was one of the more tightly contested games on the final day of regular-season matches.

The Masters edged Quality 3-2 in the first half, despite some question on other possible goals to dck’s credit. The league’s Golden Boot race leader Paige Surber opened her team’s scoring spree in the second half, looping her shot around dck defender Blanda Camacho and past the Masters keeper Cara Walsh to knot the match at 3-all. Two minutes later, Nieves Cabreza scored on a play from a kick-in to give Quality the 4-3 advantage. Another goal from Surber with just about 13 minutes left on the clock made it 5-3, and one minute later, she was credited with an assist to Cabreza, whose shot made it a 6-3 game with just under 12 minutes left to go. The Masters’ Rhoda Bamba was able to salvage just one more goal for team after getting into position to receive a goalkeeper throw from Walsh. Bamba carefully let the ball roll off her head and back right into the goal for the final score.

[dck Masters’ Kyung Shipman and Quality Distributors’ Paige Surber battle for possession of the ball during a match of the 2012 Bud Light Women’s Futsal League Sunday at the Guam Sports Complex gym in Harmon. Quality defeated the Masters 6-4 to move on to the league playoffs.]

Surber led all scorers with four goals. Cabreza scored Quality’s two other goals. Bamba led the dck Masters with two goals. The Masters’ other goals came from Kyung Shipman and a Quality own goal in the first half.

In other games, the Paintco Lady Strykers defeated Pika Soccer Club 8-0 to also advance into the playoffs. The Lady Strykers’ Alexy Barbe and Mia Santos each scored twice and teammates Krystiana Martinez, Christina Duenas, Felicia Alumbaugh and Sheena Borja added one each to the team’s tally. 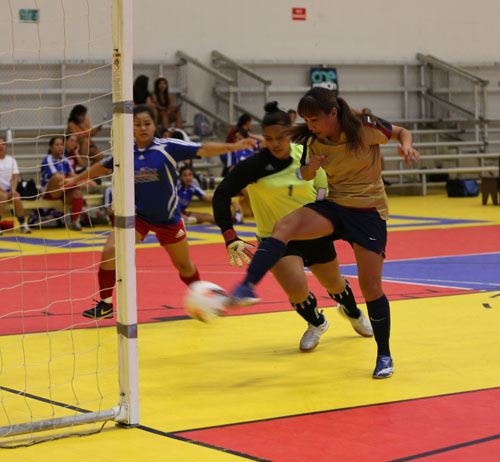 [dck Masters’ Rhoda Bamba uses the outside of her foot to follow up on a shot blocked by Quality Distributors goalkeeper Lorraina Sanchez (1) during a match of the 2012 Bud Light Women’s Futsal League Sunday at the Guam Sports Complex gym in Harmon. Quality defeated the Masters 6-4 to move on to the league playoffs.]

The Lady Strykers and Quality will play Nov. 25 at 3 p.m. at the Guam Sports Complex gym, with the Lady Crushers and Hyundai playing in the other semifinal playoff match at 4 p.m. The winners of the games advance to the championship game the following Sunday.