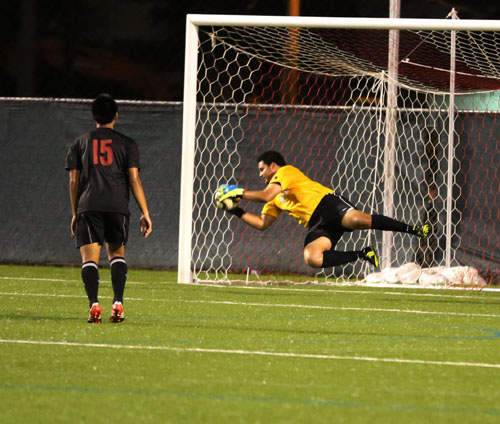 Quality’s Aaron Scott had the early goal against Espada FC and Scott Spindel added another before halftime to take a commanding 2-0 lead. Alan Jamison recorded Espada FC’s first goal in the 52nd minute and 20 minutes later, a Thaddeus Atalig goal reduced his team’s deficit to just one goal. Quality keeper Brett Maluwelmeng recorded a few key saves in the last 20 minutes of play and his team’s defense also shut down the league’s leading scorer Elias Merfalen to salvage the draw.

In other Division I games, Guam Shipyard blanked Doosan FC 3-0 with two late goals from Ashton Surber and one from Donald Weakley. The Southern Cobras settled for a 4-4 draw with the Paintco Strykers. The Cobras held the slim 4-3 advantage with less than five minutes in the game, but a defensive foul cost them, as the resulting goal from the Strykers’ Jan-Willem Staman knotted the game before the final whistle. Staman led all scorers with a hat trick and teammate Edoardo Regno added one goal. Austin Cruz, Eddie Lorenzo, Jeremy Copple and Gerard Aguon scored for the Cobras.

The Rovers continued its winning ways with a 6-1 victory over the FC Shotguns. Take Inoue led all scorers with a hat trick and teammate Jeremy Hare scored twice for the Rovers. Nhiem Le scored the Rovers’ other goal. Stuart Olson scored the Shotguns’ lone goal in the 88th minute.

The Crushers lived up to its name with a 10-2 victory over Xtra Krispy FC. The Crushers’ Josh Pangelinan scored a hat trick in the first half and teammates Shawn Spindel and Alfred Agahan each scored twice in the contest. The Crushers’ other goals came from Franklin Castro, Ryan Shipman and Jonathan Guerrero.

League action resumes Nov. 16 following the conclusion of the AFC U16 Women’s Football Championship qualifier tournament. The FC Shotguns will be taking on the Ambassadors at 9 p.m. Nov. 16 in Division II action.Quality Distributors held down a goal-hungry Table 35 Espada FC for nearly 20 minutes to secure a 3-2 win in the battle of the undefeated in Week 3 of the Budweiser Soccer League at the Guam Football Association National Training Center.