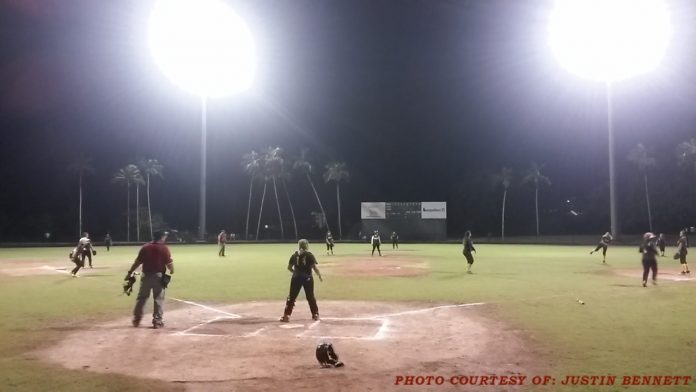 Down 11-5 going into the bottom of the 6th inning the Lady Rangers would bat around scoring eight runs to catch Northern Mix.

Northern Mix lead all game extending their lead to 11-5 with a five run 6th inning of their own.  Shannon Santos, Janey Nauta and Alexis Santos had three hits each and Kayla Edward had two long doubles as Northern Mix came out swinging.

Danica Jano would hold the Lady Rangers at bay finishing with four quality innings allowing only three runs giving way to Alexis Santos out of the bullpen in the 5th inning.  Lady Rangers batters would take advantage of the change of pace.

Down 11-5 going into the bottom of the 6th inning the Lady Rangers would bat around scoring eight runs to catch Northern Mix.  Five straight hits and two rbi singles by Aunie Chaco and Larissa Dirige sparked the rally as they would take a 13-11 lead into the last inning.

Lady Rangers starter Tomisha Roberto would give up a lead-off single in the top of the 7th inning but her defense would come through getting a double play on a liner to second to end the game.  Roberto picks up the win going all seven innings with six strikeouts.

Northern Mix is eliminated from the playoffs despite their offense coming alive and pounding out fifteen hits in the game.  They also flashed the leather with great defense by 2nd baseman Ha’ane Taitano and leftfielder Edward turning in rally killing plays.

The Lady Ranger’s Keah Rae Flores was 3 for 3 including an rbi single in the huge 6th inning to claim Strike Zone Player of the Game.  Teammates Paulette Nededog and Dirige added two hits each.  Every player in the Lady Rangers lineup reached base and scored a run as they advance to take on #3 Lady Adahi in another elimination game Wednesday night 7pm at Leo Palace Resort.

Follow Bud Light Queen of the Diamond Tournament action live on Facebook/AmateurBaseballGuam and check out schedules, scores, stats and more at www.guamstrikezone.com.