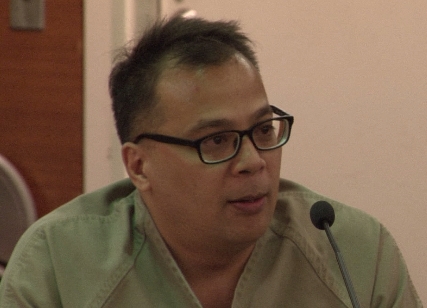 Even with support letters and testimony from a former chief of police, Anthony Quenga was sentenced to 30 years for his involvement in the Blue House prostitution case.

Guam – Over four years ago, former Guam Police Department officer Anthony Quenga began serving time in prison for his involvement in the Blue House prostitution case. At his sentencing hearing, Judge Anita Sukola noted that, according to a pre-sentence investigation, Quenga had served as a police officer for over 20 years, and has received six letters of support from family and friends. Quenga also received support from former police chief, Paul Suba, who spoke of Quenga’s professionalism and character.

“I know his personality. I know his character, and it just doesn’t fit,” Suba told PNC. “But my main concern is that he was a good officer, he served the community quite well for two decades, good family behind him — they would have known if there was something criminal about his behavior or deceptive, and none of that came to their attention… There are unanswered questions, but even more so, my personal view of the character of this individual just does not fit they type of crime, nor any of the punishment that I’m hearing he may be facing.”

Quenga also addressed the court in his statement, saying it was not in his character to commit the crimes of which he was accused.

“I did not commit these crimes. I would not ever gamble my life, freedom, my family, loved ones, friends for what the AGs in trial said I profited of just getting free drinks or discounted drinks. I would not gamble my career with that, or my life. The whole time I’ve been in there, all I’ve been doing is praying. Praying for the healing of these young women. I always pray to give them the strength and courage to come forward and tell the truth — the truth that would, one day, set me free to be with my family again and live my life,” Quenga said. “Your honor, I am not a bad person. I’m a good person. I always try and take care of people, be it at work or home. It’s just not my character as well.”

But Asst. Atty. Gen. Jonathan Quan argued that Quenga was already found guilty by a jury, and therefore, must serve his time.

Quenga’s co-defendant, Mario Laxamana, walked away a free man after paying a $5,000 fine and an $80 court fee. He pled guilty to felonious restraint as a third-degree felony and official misconduct as a misdemeanor, giving him 4 years’ imprisonment, which he has already served.

Quenga, on the other hand, was not as fortunate. Judge Anita Sukola stated, “The court, giving you the opportunity to make any statement on your behalf, notes that you are notes that you are not remorseful; you still insist that you did not commit any of these crimes,” and sentenced him to a total of 30 years to be served concurrently for all this charges.

Quenga has the right to appeal the sentence. His restitution hearing is scheduled for June 11 at 11 a.m. His other co-defendant, David Manila, has his sentencing hearing rescheduled for May 11.