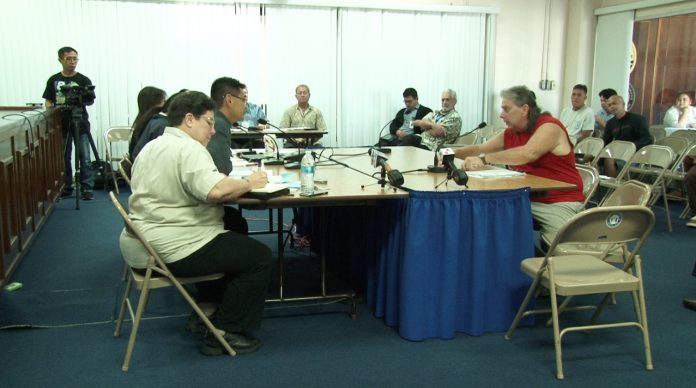 Guam resident August Fest voices his concern over home cultivation at a public hearing for the proposed rules and regulations for Medical Marijuana.

Guam – One week after a round of fiery Public hearings, questions still surround the Medical Marijuana Initiative here on Guam. One of the questions that remains is whether or not patients and/or caregivers can grow their own marijuana without oversight or fees. The question was brought up during the public hearing last week by Guam resident August Fest.

“Caregivers…caregivers are allowed to grow for patients, correct? Tell the people, tell them….There’s nothing that prohibits a caregiver from growing for patients, no money involved…you as a patient, you can grow, if you’re a care giver you can grow for people, if you don’t have any business, you can grow,” said resident August Fest.

At the time, Public Health said that nothing in the law prohibits patients from growing medical marijuana in the privacy of their home. While that may be true there are rules and regulations against it We asked Public Health Official Rosanna Rabago if its true that as it currently stands, qualified patients and caregivers can grow their own marijuana without regulation?

That’s, no that would be incorrect, the way the proposed riles and regulations are written right now, any qualified patient would be able to home cultivate, but they would have to do so through the criteria specified as a cultivation site application,” said Rosana Rabago, Public Health Official.

James Gillan, Director of Public Health told PNC in a phone interview that he doesn’t know how to regulate patients from growing marijuana in their homes free of charge. Currently, Rabago points out that if a patient or caregiver is cultivating at their home, they will have to pay for a cultivation application, which is $35,000.

“As it stands right now, there is no differentiation in the language of the current proposed rules and regulations that differentiates a qualified patient of from home cultivating as opposed to those who would be, let’s say, a commercial cultivation site,” said Rabago.

It’s important to point out that what’s proposed in the rules and regulations right now, is not what the finished product will look like. Rabago says that Public Health has been clear that they are not out to make a profit. She acknowledges, however, that $35,000 for an application fee is steep and they are still in the process of revisiting the fee.