The four visiting junior players from Saipan – Julia Ishikawa, Nathania Tan, Malika Miyawaki, and Grace Choi – dominated both singles and doubles play in the Girls U14 division. The foursome all played the semifinals of the singles division and the finals of the doubles division.

In Sunday’s doubles matches, the pair of Ishikawa and Tan mixed up power, speed and consistency to defeat Alyssa Merletti and Victoria Smith 10-2.

“I was nervous going into the match – I didn’t know how they were going to play,” said Smith, who was playing in her first USTA Juniors points-earning event at the Quality Cup. “(On Saturday), we warmed up with them for a few minutes before it started raining. From the warm up and watching their other matches, I knew their serves were hard.

“Having the opportunity to play against them inspired me to further improve my game and also hit serves hard like them,” the 13-year-old St. Anthony Catholic School student added.

In other other Girls U14 division doubles semifinal, Miyawaki and Choi also finished with a 10-2 victory, defeating Kanasta Abrams and Nozomi Yamasawa in a continuation of their doubles match that was stopped Saturday due to wet court conditions from the rain.

Ishikawa/Tan later defeated Miyawaki/Choi 8-1 in the U14 Girls Doubles final in a shortened eight-game pro-set. 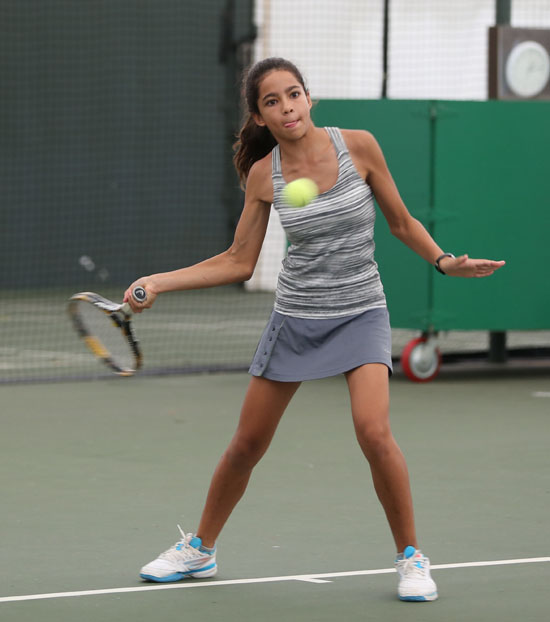 [Kanasta Abrams keeps her eyes on the ball while preparing to send a forehand return to Malika Miyawaki and Grace Choi during a Girls U14 division doubles semifinal match of the Quality Cup tennis tournament at the Pacific Islands Club indoor tennis courts. Miyawaki/Choi defeated Abrams and partner Nozomi Yamasawa 10-2.]

Before the doubles final, Ishikawa defeated Choi in one of the singles semifinals 8-2 to set up a division championship match against Tan, who defeated Miyawaki 8-3 in the other semifinal match.

“I’d like to thank PIC for graciously providing an indoor venue for our Girls U14 division matches,” said Joe Cepeda, Quality Cup tournament director. “The visiting players from Saipan enjoyed the tournament and were glad to have played out their remaining matches before having to head back home.

“We were hoping for some sun (Sunday) so all other players scheduled would be able to play their matches. With the rain all morning and through the afternoon, we had to cancel the matches,” Cepeda added.

All other junior division matches and Men’s Age singles matches will be rescheduled to a later time. A revised schedule will posted on the www.tennisacademyguam.com Web site.