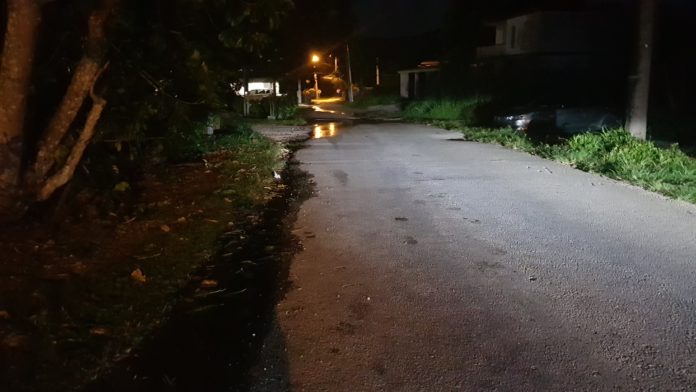 Guam – A resident from Luna Avenue in Agana Heights is speaking out after dealing with the foul effects of a neighbor’s raw sewage which passes directly in front of her yard. She tells PNC that she feels like “nobody gives a crap.”

On Luna Avenue the residents are left with a foul stench, as the water tou see here isnt rain water its sewage.

PNC was on scene to experience the unpleasant ordor eminating from the raw sewage and spoke with a concerned citizen who says the government is ingoring her calls for something to be done.
“We called EPA we called Guam Water works, Agana Heights Mayor, Public health and they come out inspect it do whatever they got to do and then it’s just a reoccurring situation,” stated the concerned resident.

PNC asked what the agencies said when she called.

“Nothing I am the one who would have to call and follow up and so it’s like deaf ears. Nobody gets back to me you know. It’s not a concern for them because they don’t have to deal with this kind of stuff,” she stated.

She says her main concern is the children who play in the area and the family who lives in the home where the sewage is coming from.

“Our main concern is of course is this we have kids running down the street. We also have those that are living in that home that have to deal with this kind of stuff so. I mean it’s an ongoing issue. I mean thank God like I said no one has been sick but you know what we have to wait for someone to get sick,” she shared.

There are many health risks associated with raw sewage such as exposure to viruses, bacteria and parasites. Exposure to this can cause a person to become severely ill, even just breathing the fumes eminated by the raw sewage can cause nausea.

A video shows that there is so much raw sewage flowing down the street that it created a small stream which stretches over 100 feet. The resident is concerned that it may not only affect the residents of the area but ultimately the community as a river is nearby.

“And as it goes further down it affects other houses and then there is a river,” she explained.

She says because there is a river nearby there is a potential for the raw sewage run off to pollute our waters and ultimately take a toll on the environment.

Throughout the evening a local plumbing company was present and after several hours a DPW crew arrived onsight to try to mitigate the situation by pouring a powdery substance on the sewage stream before flushing it away.

But according to the resident, its a continual problem and only a band-aid approach is being used. The residential area is linked to a sewer system leading the concerned resident to believe that a bigger problem is occurring as she says this has happened at least four times in one year, each time the effects last for about a week.

A gastly problem which she says ends up in her yard. She is hopeful that shedding light on the stinky situation will bring about a more permanent fix.