Guam – Although local real estate lending contracted significantly in 2010, there were strong indicators of positive growth in the Guam real estate market, according to the latest release from Captain Real Estate Group.

The military build-up will dominate Guam’s economy and real estate market through this decade. The now obvious slowdown comes on the heels of the Record of Decision (“ROD”), which indicates that Guam’s housing market had a 2,800 unit excess capacity. New housing demand was estimated to approximate 2,500 units per year for four years, resulting in excess capacity of over 8,000 units post-build up. Under the original timeline, there would be a need for 12,000 civilian housing units in 2014 alone, falling to 3,205 units by 2017, after construction. Fortunately, the estimates were concluded as seriously flawed in light of Guam’s infrastructure and politics. The slowdown is good for Guam as the ROD estimates would have resulted in serious market clashes and a housing war where landlords are kings. The ROD says that “This rapid and substantial increase in population on Guam would create “boom town” opportunities and problems.” The slowdown in population growth will smooth out the boom and bust cycles previously experienced in Guam.

Single Family Dwelling (“SFD”) market activity during 2010 was relatively stable with 4 percent growth in dollar volume to $141.7 million. During 2010, the median price of a single family house hit $212,500, up 6 percent, but has remained within the range of $195,000 to $215,000 since 2007. The dollar sales growth in 2010 occurred along with shrinkage of 5 percent in the number of houses sold, which reflected 586 units in 2010. Unit sales volume peaked during 2006 to 2008 with over 700 houses sold annually. The 2010 unit sales volume reflected the lowest annual total since 2003. The annual SFD unit sales volume, which peaked at 774 units in 2007, pales compared to the Department of Defense’s Record of Decision which details the Guam military build-up and notes that new civilian housing demand, under the now-delayed initial build-up scenario, would average 2,500 units annually through 2015. High end SFD sales (above $500,000) increased over 20 percent in 2010, as the return of economic normalcy brought wealthy individuals back into the market. 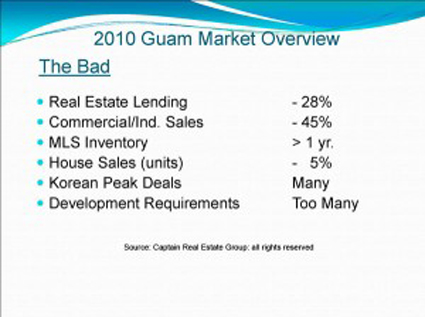 In the condominium sector, the median price increased by nearly 13 percent to $140,000 in 2010, while the number of transactions increased by over 21 percent, to 183 units. Condominium sales volume (in dollars) was up last year by over 48 percent to $32.2 million. The high end condominium sector continued it’s rebound with 23 transactions priced over $350,000 in 2010, more than double 2009 activity.

Land sales in 2010 hit $94.5 million, up by nearly 110 percent, and approximating the combined totals from 2004 and 2005. The number of land sales in 2010 was up by almost 15 percent to 459 transactions. The multi-family sector rebounded in 2010, increasing 75 percent to $17.9 million in sales volume; primarily due to the bulk sale of Talo Verde houses as apartment building sales volume was anemic. The commercial and industrial sectors lagged in 2010, with sales volume down by 45 percent to only $19.9 million in combined sales. These sectors were positively impacted by upward pressure on rents and occupancy; however, sales volume declined significantly due to the wide price expectation gap between buyers and sellers.

Guam’s residential real estate market is healthy compared to the U.S. Mainland. According to the S&P/case Shiller Home Price Index, home prices nationwide are back to their mid-2003 levels, while the Guam median price is up 85 percent from 2003. U.S. home prices are down an average of 33 percent from their recent peak, but the 2010 Guam median price was only one percent lower than the 2008 peak of $215,000.

Notable Transactions – 2010 was the year of Talo Verde’s foreclosure, the four abandoned towers, the Marriott foreclosure sale, and the auction of Tumon oceanfront land. Notable transactions in 2010 included more than just foreclosure deals and abandoned projects (“on hold”). The $15.4 million bulk sale of 28 Talo Verde houses closed in 2010 with local buyers benefitting from the discounted prices. Guam’s largest industrial complex, IXORA, sold at $7.2 million and Tumon oceanfront land (former Royal Palm) sold at over $500 per square meter. Notably, USDA loan activity skyrocketed in 2010, to 81 loans, up from only 18 deals in 2009. Ironwood Heights and Sagan Bonita affordable housing projects were both successful in 2010 while the Ysrael’s are quietly building a 180 unit apartment complex in Tumon.