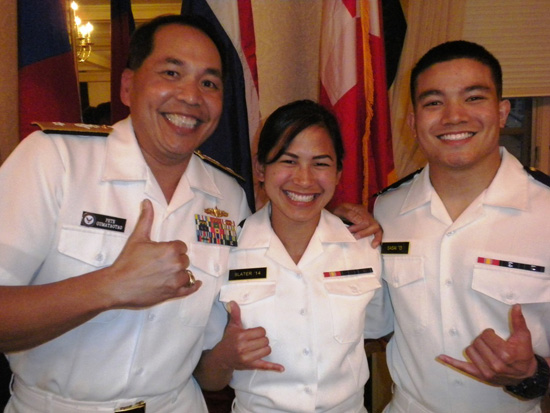 Guam – On April 30, 2013 a banquet was held at the United States Naval Academy Officer’s Club at the Naval Academy in Annapolis, Maryland to celebrate Asian Pacific American Heritage Month.

Asia Pacific American Heritage Month is the month of May, but due to the busy schedules of the Midshipmen the Navy celebrated in April.

The banquet was the culminating event for the month which included language workshops for both speaking and writing, food and movie nights, a trip to DC during the Cherry Blossom festival, and a joint-club mixer.

[RADM Gumataotao (Asst. Deputy CNO for Operations, Plans, and Strategies) was one of the three Naval Flag Officers in attendance. Midshipman Second Class Riacca (Camacho-Calvo) Slater and Midshipman First Class Matthew Limtiaco Sasai were invited to join him at his table at the banquet. All three are Chamorro, born and raised on Guam, and attended the Naval Academy Preparatory School (NAPS) before attending the Naval Academy.]